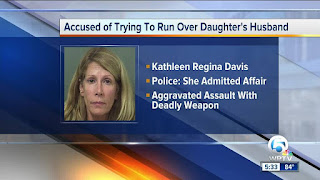 Florida mom has affair with daughter's husband, attempts to run him over

Kathleen Regina Davis, 58, of Jupiter, was arrested on Sept. 20 after attempting to run over Michael Sciarra, 33, with her Mercedes-Benz, Palm Beach Gardens police said.

Davis was upset with Sciarra for ruining her own relationship with her daughter by admitting the two had been involved in an affair.

Davis went to Sciarra's Palm Beach Gardens home and threw eggs at both the house and cars.

Sciarra and Davis' daughter are in the process of being divorced.

Upon arrival, police witnessed Davis driving towards Sciarra in the front of the house in an attempt to run him over.

Police said Davis admitted to wanting to run over Sciarra and that she wanted him to die.

What the hell was he thinking?
Posted by Fritz at 7:37 PM