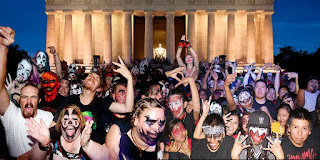 What Is A ‘Juggalo’ And Why Are They Marching On Washington?

Turns out, ‘Juggalos’ are the fandom attached to the hip hop group Insane Clown Posse. You remember Insane Clown Posse, they’re the two guys – Violent J and Shaggy 2 Dope – who cover their faces with extremely unflattering clown makeup and perform something called ‘horrorcore’, which is apparently hardcore hip hop. 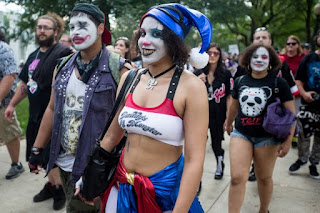 It seems kinds of silly to me. Just the sort of things young people do, sometimes. I've seen stupider.

So, Juggalos like to dress up like their idols Violent J and Shaggy 2 Dope; female Juggalos are called ‘Juggalettes’. The ‘los and ‘lettes tend to be people who feel like societal outcasts, and one author who wrote a book about them concluded, “It’s this alternate universe they can escape into from the dreariness and the mundanity of everyday life.” 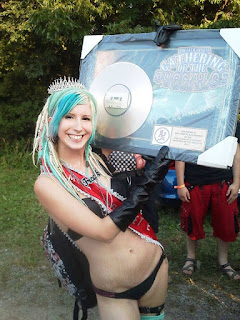 ". . . escape into from the dreariness and the mundanity of everyday life?"  How mundane.


While the Juggalos are not exactly a political movement, there is a political reason behind their march today in Washington, D.C. You see, back in 2011, Obama’s Justice Department and its National Gang Intelligence Center deemed them a “hybrid gang” akin to MS-13. There were a few, isolated criminal incidents cited as being committed by Juggalos, but hardly enough to call them a gang.

Being classified as a gang by the federal government didn’t sit well with Juggalos, Juggalettes, or the Insane Clown Posse themselves, who filed a lawsuit agains the government on behalf of their fans. Litigation is still pending. 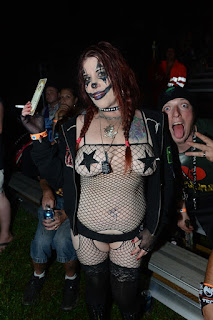 That seems like a stretch. They probably needed a mostly white crowd to portray as a gang for affirmative actions purposes. I don't see many naturally colored faces in the crowds.


Juggalos and Juggalettes are taking to the streets of D.C. today to protest their gang classification. Via the march website, the fandom announced they’d be marching to “make a collective statement from the Juggalo Family to the world about what we are and what we are not.”

“The Juggalo Family must truly shine and show America and the world that we are not a gang, public menace, cult, or any of the other untrue labels they have attempted to slap on us throughout the years. We must collectively show them that we truly are a family that is united by a shared love of music and fellowship.” 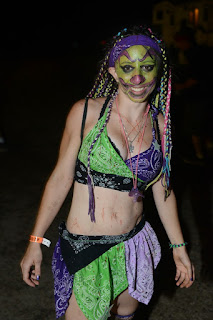 
A quick spin around the #JuggaloMarch hashtag on Twitter shows that the most trouble the fans have caused thus far is confusion amongst Chinese tourists. There are even reports of the marchers picking up each others’ trash and cigarette butts. (Earth Day marchers could learn a thing or two from the Juggalos.)

The Lovely Juggalettes of the 2013 Gathering (NSFW), and some more tasteful than others.