And Yet, Still More Obamacare Schadenfreude

At this point it's not clear who's schaden and why.  Obamacare continues its decent into the abyss. Obamacare Causes New York’s Largest Hospital Network to Leave Insurance Market.

Northwell Health (the former North Shore-Long Island Jewish Medical Center network ) blamed a flawed provision in the Affordable Care Act — and the lack of action in Washington to fix it — as the culprits for winding down its CareConnect insurance company.
CareConnect enrolled 14 percent of firms in New York’s small group market and 8 percent of customers in the individual ObamaCare market — mostly on Long Island and in New York City.

In 2016, the hospital doled out $112 million “into a risk insurance pool created to prop up insurers that had a disproportionate number of high-risk or money-losing clients.” This pool helps stop the “insurers from ‘cherry-picking’ younger and healthier customers who are less expensive to cover.”

Well, at least that state voted for it. Obamacare Insurer Pulls Out Of Rural Virginia Leaving Coverage Gaps. Rural Virginians probably didn't. Waiting Longer for an Ambulance When Seconds Count? Blame Obamacare. In a business where time is life. Frustration mounts over premiums for individual health plans. They can't say they weren't warned. 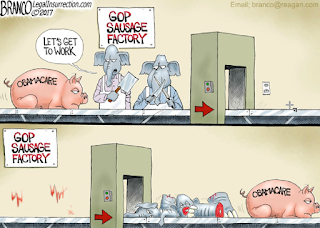 
It’s worth repeating that, as recently as three years ago, Kasich said the following regarding the health care law: “From Day One, and up until today and into tomorrow, I do not support Obamacare. I never have, and I believe it should be repealed.”

Oh, how times have changed. The governors’ plan would not only not repeal Obamacare, it would further entrench the law, by giving tens of billions, and more likely hundreds of billions, of new taxpayer funds to wealthy insurance companies.

Making him about equal to most congressional Republicans. Republicans Wave the White Flag on Obamacare


Alexander is Chairman of the Senate Health, Education, Labor and Pensions (HELP) Committee, which will this week begin hearings whose ostensible purpose will be to explore ideas on how to “stabilize” the individual insurance market. Their real purpose, of course, will be to negotiate the terms of surrender. The committee will hear testimony from insurance executives, state insurance commissioners, and alleged policy experts. But the real action will be on Thursday when testimony will be provided by selected state governors, more than one of whom recently joined Ohio RINO John Kasich in calling for Congress to bail out Obamacare.


. . .rather than constructing substantively cumbersome waiver arrangements—the legislative equivalent of a camel being a horse written by committee—Occam’s Razor suggests a simpler, cleaner solution: Preserving the status quo (i.e., the enhanced federal match) on Medicaid expansion in exchange for full repeal of Obamacare’s insurance regulations at the federal level.

A “grand bargain” in this vein would give Senate moderates a clear win on Medicaid expansion, while providing conservatives their desired outcome on Obamacare’s regulations. For this conservative at least, the regulations represent the heart of the law, prompting both its spending on exchange subsidies—to offset the higher premium costs from the regulatory mandates—and the taxes needed to fund that spending. Expelling the regulations from the federal statute books would represent a clear step towards the promise of repealing Obamacare “root and branch,” and return control of health insurance to the states, where it lay from 1947’s McCarran-Ferguson Act until Obamacare.

Here’s The Real Reason Trump Is Angry With McConnell And Ryan. I think he has an abundance of real reasons. The debt ceiling fight? Trump seems to have cut the Gordian Knot on that fight. Here We Go: McCain, Trump Endorse Last-Gasp ObamaCare Repeal Bill. Why would anyone take McCain seriously at this point?

Sen. John McCain (R-Ariz.) said Wednesday that he supports a newer version of an ObamaCare repeal-and-replace bill, throwing some support behind the last-ditch effort.
McCain said he backs a bill from Sens. Lindsey Graham (R-S.C.) and Bill Cassidy (R-La.) that would convert ObamaCare spending into block grants for states. …
“If it’s not through regular order then it’s a mistake, but it doesn’t mean I wouldn’t vote for it,” McCain said when asked about his previous statements.

. . .
Just how likely will passage be? Graham-Cassidy doesn’t have any legislative text, so it technically doesn’t qualify for reconciliation — yet. It will have to reduce Medicaid spending in some form to qualify, which may not gain back Susan Collins and Lisa Murkowski, although excluding a Planned Parenthood defunding clause might just be enough to get them to back it.


Health insurers won a victory in 2015 when a tax that was part of the Affordable Care Act was suspended. Now as they fight to repeal or delay the tax again before it comes back into effect, the odds don’t seem to be in their favor.

Insurers, businesses and conservative groups are scrambling for ways to at least delay the health-insurance tax, or HIT, following the collapse of health-care legislation in July. They seemed poised for victory just a few months ago, when the health-insurance fee, and most of the other levies enacted to help fund Obamacare, were targeted in repeal bills passed by House Republicans and considered by Senate Republicans.

The health-insurance tax, which is scheduled to go back into effect in December, is an annual fee owed by insurers such as Anthem Inc., UnitedHealth Group Inc. and Aetna Inc. that varies based on their share of net premiums written nationally -- the aggregate amount owed would total $14.3 billion in 2018. Those opposed to the tax are trying to pitch the message that repealing it could prevent higher premium costs for consumers.

The HIT took effect in 2014, but an omnibus bill passed at the end of 2015 temporarily suspended it starting last year.

A tax on health insurance? The rule of thumb is you tax what you want to discourage. . .


In order to provide free or subsidized healthcare insurance for millions, Obamacare raised capital gains taxes to 23.8%.  It also found revenue in a number of other places, but the capital gains tax increase accounts for roughly 91% of the revenue necessary to pay for Obamacare.

A good reason, but not the best. The best reason is the freedom of individuals to choose their own health care.

Sen. Chris Murphy Has A ‘Stealthy’ Plan To Get To Single-Payer Of course he does. He's a Democrat. It's not all that stealthy, though.


Back in 2009/2010, Democrats were pushing for a “public option,” a plan to compete with private health plans but one run by the government. As in Murphy’s plan, people would buy it on the Obamacare exchanges. Granted, Murphy’s new plan isn’t identical to the public option but it is similar. And as he admits, the goal is to move the country toward single-payer.

What’s striking is that back when the public option was actually under consideration, Democrats from President Obama on down claimed it was all about “choice and competition.” There was no government takeover planned. Obamacare was not a trojan horse for single-payer. Where did anyone get this crazy idea? But a few years later this similar proposal is now being framed as a stepping stone to the ultimate goal: single payer.

And yet, to this day, it’s difficult to find many mainstream news outlets that count this as one of the ways Democrats lied to the American people during the Obamacare debate. They’ve all belatedly acknowledged that “If you like your plan you can keep it” was a fiction, but the fact that leading Democrats also tried to sneak a stepping stone toward single-payer into Obamacare without admitting it is something they don’t talk about, even now when it is undeniable.