Dissolved oxygen conditions in a portion of Maryland’s Chesapeake Bay mainstem were better than average for late August, reports the Maryland Department of Natural Resources.

The hypoxic water volume (areas with less than 2 mg/l oxygen) in the study area was 0.33 cubic miles, which is much smaller than the late August 1985-2016 average of 0.80 cubic miles for that reduced area. Crabs, fish, oysters and other creatures require oxygen to survive with levels above 5 mg/l considered optimal to support aquatic health.

Data was only assessed between the lower Susquehanna River (CB1.1) and Chesapeake Bay stations (CB5.2), which is slightly north of the Potomac River due to inhospitable weather conditions. This represents only 75 percent of the normal volume assessed for Maryland’s main bay. The remaining area, which was between the Potomac River and the Maryland-Virginia state line, consists of deeper waters where low dissolved oxygen may have been present. Therefore, the results discussed for late August are incomplete and not fully comparable to previous periods. 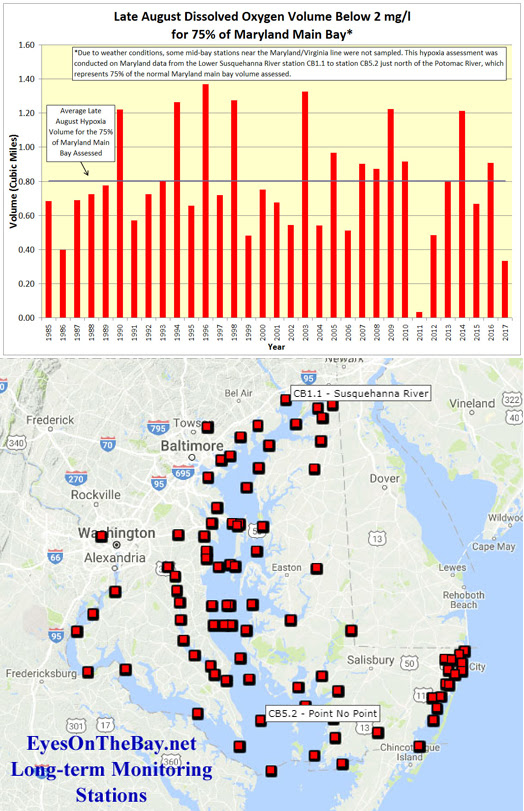 Conditions could be more favorable due, in part, to the overall influence of Chesapeake Bay restoration efforts to reduce nutrient and sediment pollution, as well as below average temperatures. Higher temperatures generally cause more stratification of the water column, which inhibits oxygen from mixing into deeper waters. Waters with higher temperatures also hold less oxygen. Winds were also higher than average during sampling, likely mixing oxygen deeper into the water column.
In the beginning of June, the National Oceanic and Atmospheric Administration, U.S. Geological Survey, University of Maryland Center for Environmental Science and University of Michigan scientists predicted a slightly larger than average hypoxic volume for the bay due to higher spring flows (January-May) and nitrogen loading from the Susquehanna River.

It's almost enough to make me optimistic. But not quite yet. There's still a lot of unexplained annual variability.
Posted by Fritz at 7:00 PM