A Civil War Over Menhaden?

Five years ago, the Atlantic States Marine Fisheries Commission cut the menhaden harvest by 20 percent, forcing the largest employer in the rural tip of the Northern Neck, Omega Protein, to lay off workers and decommission a ship.

The tiny fish is sold by fishermen as bait to catch blue crabs and commercially rendered for its oil and byproducts at Omega’s Reedville plant. Environmentalists and anglers say it’s critical to the diet of other Chesapeake Bay and Atlantic species such as osprey, striped bass and dolphin. At the time, commissioners said menhaden was at the point of being depleted.

Since then, ASMFC, which manages fisheries from Maine to Florida, changed its method of assessment and says stocks are now healthy. It began easing catch limits to where the quota is now only about 6 percent short of the 212,000 metric tons it once was.
Omega, which catches a half-billion fish each year, replaced two of its seven ships this year with larger, more efficient ships and rehired some of its employees.

But the company sees a new problem. 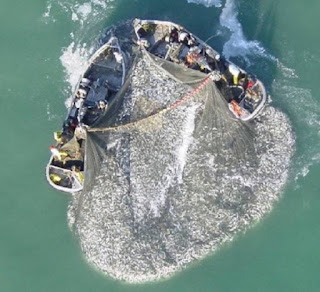 Monty Deihl, vice president of Omega’s operations, calls it “a fish grab” by other ASMFC member states, specifically northern states where more menhaden have been showing up.

“The stock is very healthy, the quota could be raised, but no one wants to raise the quota because Virginia will get 85 percent of whatever is raised,” he told a crowd of mostly employees and their families at an ASMFC public hearing last week. “You should be offended at the way all the other stuff was done to try to get a piece of what you all put your time and careers in to build.”

During ASMFC’s summer meeting, commissioners from New York and Maine, which in recent times have not had much of a menhaden fishery, said they are having episodes where large masses of menhaden enter their waters. Now their fishermen, who sell menhaden as bait to catch lobster and other fish, want to ensure their share. Commissioners are struggling with how to do that.

“Things have changed,” said Dennis Abbott, representing New Hampshire at the ASMFC meeting last February. “It doesn’t make sense that the state of New York can only catch a handful of fish or that the state of Maine, who needs baitfish and has fish off their coast … has no allocations and has to go begging to the state of Virginia to get a million pounds to keep their lobster industry going.”

In November, commissioners will decide on whether to raise the quota and consider amendments on how to reallocate to states such as Maine, New York and even Rhode Island, which used to have a large menhaden fishery and wants a larger quota.

From my observations, Menhaden number are either not fully recovered, or Maryland's population of large menhaden is being caught up in Virginia on their way north. But it seems to me that the "northern scum" seem to have a reasonable claim to a portion of the improved catch.
Posted by Fritz at 7:43 PM