These really should be #1, 1, 1, 1, and 1: Hillary Clinton, who is currently trying to sell her book blaming everything and everybody (well, if you have to buy, it, buy it here and make me a few pennies), except herself, for her loss. Clinton blames Comey, Russia, Wikileaks, Fake News, Voter ID Laws, Sexism and Misogynyy for Losing.


Hillary Clinton believes that were it not for James Comey, Russia, Wikileaks, Facebook, fake news, voter ID laws, or America's "endemic" sexism and misogyny, she would currently be president of the United States.

In just under two minutes, Clinton rattled off eight separate excuses for losing the 2016 election.

You can only do that with a lot of practice.


Clinton claims that, "If the election were on October 27, I would be your president," singling out James Comey in particular for re-opening an investigation into her mishandling of classified material. (Others notably argue that Comey kept Clinton in the campaign by preemptively exonerating Clinton before the FBI had concluded its own investigation.)

"I went from 26 points ahead to 13 points ahead, and I needed about 18 points in order to be sure to win Pennsylvania," Clinton said of the impact of Comey's notorious letter explaining he was re-opening the investigation. "I watched how analysts who I have a great deal of respect for, like Nate Silver, burrowed into all the data and said that 'but for that Comey letter, she would have won.'"

She did admit that, maybe, Threatening Coal Jobs was a Mistake


Clinton made the remark during a town hall in Columbus, Ohio in March 2016, during which she touted her plan to replace fossil fuel-based energy production with renewable systems.

“I’m the only candidate which has a policy about how to bring economic opportunity using clean renewable energy as the key into coal country,” she said. “Because we’re going to put a lot of coal miners and coal companies out of business.”
…
Clinton later called the comment a “misstatement” that she mistakenly made “out of context.”


Hillary Clinton is blaming her Wisconsin loss on a voter ID law that she alleged helped “reduce turnout by 200,000 votes,” in the state. The only problem for Clinton is that independent fact checkers have blasted the study she cited as false.

In “What Happened,” Clinton wrote:


“In Wisconsin, where I lost by just 22,748 votes, a study from Priorities USA estimated that the new voter ID law helped reduce turnout by 200,000 votes, primarily from low-income and minority areas.”

PolitiFact scored this claim as “mostly false,” in May when Sen. Tammy Baldwin (D-WI) alleged, “Voter turnout in 2016 was reduced by approx. 200,000 votes because of WI’s photo ID laws.”

It was reduced by 200,000 votes because she didn't campaign in Wisconsin, and failed to interest the low-income and minority voters (or anyone else except committed feminists, for that matter). 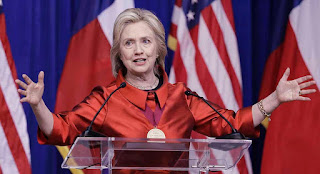 Maybe Bill should have taken her aside and explained how the electoral college works: Hillary: No One Told Me About This Shocking, “Godforsaken” Obstacle In 2016, Or Something.


“I go back over my own shortcomings and the mistakes we made. I take responsibility for all of them,” she writes. “In my more introspective moments, I do recognize that my campaign in 2016 lacked the sense of urgency and passion that I remember from (Bill Clinton’s 1992 campaign).”

But Clinton also has scores to settle with those whom she says kept her from the White House. 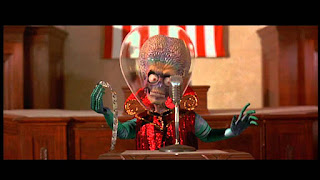 Former FBI Director James Comey, Russian meddling and the media — she singles out several journalists by name — come in for a beating, while she also lays blame at the feet of Bernie Sanders, Green Party nominee Jill Stein, Wikileaks founder Julian Assange, sexism and the electoral system itself.

“I wasn’t just running against Donald Trump. I was up against the Russian intelligence apparatus, a misguided FBI director, and now the godforsaken Electoral College,” she writes toward the end.

But even he can't stand to be in the same room with her that long.

Maybe she should add her choice to use "Mars Attacks" as her style inspiration to her list of excuses; except that would violate her  fundamental tenet of not accepting the responsibility.
Posted by Fritz at 10:16 AM