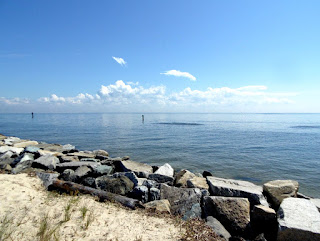 Another lovely fallish day here is slower Maryland, 75, sunny and still. Skye and I went down before lunch while George went out on errands. 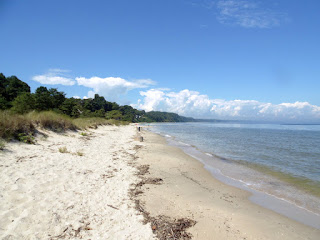 The tide was high, and fossiling not much good (3 teeth), and there were very few people on the beach. 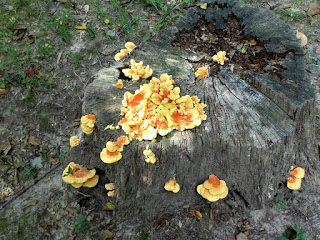 On the way home I spotted this "Chicken of the Woods" fungus growing on an old stump. I assume it's fresh, as I think I would have seen it before: 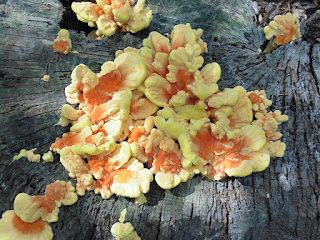 Laetiporus sulphureus, it turns out, is limited to eastern North American hardwood forests, where it causes a brown heart rot in the wood of standing and fallen oaks and other hardwoods. Since it is a heart rot fungus, the mushrooms appear above ground (often high on the tree)--or in a position that would have been above ground before the trunk fell. Laetiporus cincinnatus also appears in eastern hardwood forests, but is a root and butt rot fungus and therefore appears at the butt of the tree or on the ground near its base (additionally, Laetiporus cincinnatus has a whitish, rather than yellow, pore surface). See the notes below on three other North American species.


Entering the Mushrooms class I was a mycophagophobe; I was someone who was afraid to eat mushrooms, especially ones that I had collected. Any wild mushroom was too dangerous for me. It was not until I discovered Laetiporus sulphureus— Chicken of the Woods, that I felt comfortable enough to identify a fungus and then eat it. David Arora remarks in Mushrooms Demystified that this is one of the “foolproof four” — an unmistakable mushroom.

This large, brightly colored fungus is often found in clusters but is occasionally solitary. You may discover this mushroom during the summer and fall but rarely in winter or spring. The top surface of Chicken of the Woods is bright orange which can be either more reddish or yellowish than you see here. It tends to lighten in color near the edges. This mushroom has no gills, instead its bright yellow undersurface is covered with tiny pores. The young Chicken of the Woods is “succulent” and has a mild flavor. Older specimens tend to change color as they develop, as well as become brittle. The young mushrooms have bright yellows and oranges; in age they dull to yellow and then pure white.

A good tree can yield up to 50 pounds, but be wary of older fungi as they toughen and develop a sour flavor! If you have found a specimen worthy of collection, you can harvest the mushrooms and return the next year for another crop. Or cut just the outer edge (about 5 cm of the fungus) and return later in the season for a second helping. Be wary of Chickens growing on conifers (in the Northeast) as they are a different species and can cause poisoning. Chicken of the Woods can make a fine chicken substitute as long as you make sure to fully cook the mushroom.