The Maryland Department of Natural Resourcesannounced today that the Bloede Dam, located along the Patapsco River, is scheduled to be removed from Patapsco Valley State Park over the next two years, with completion scheduled for late spring 2019.

Construction staging and trail closures will begin Sept. 5, 2017, following the Labor Day holiday weekend. During the project, sections of the Grist Mill and Buzzards Rock trails will be closed along with portions of the Patapsco River from Ilchester Road bridge down to the dam. Park patrons, including anglers, bikers and hikers are encouraged to seek alternatives, either within the park or elsewhere. 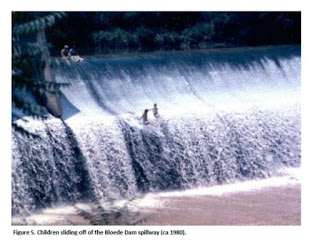 “This has been a long time coming; the department and our partners have been working on this dam removal project for the last five to six years,” Maryland Natural Resources Secretary Mark Belton said. “While we know the project may entail some short-term inconveniences, we are confident that this restoration project will ultimately enhance the ecosystem and improve public safety once complete. We ask our guests and visitors for patience as we work to reclaim the Patapsco River and ultimately help restore the Chesapeake Bay.”

The first phase of the restoration project will involve the relocation of a main sewer line, which runs through the dam and along the riverside. In order to provide safe access to the site as well as in preparation for the new hydrology of the river, the department anticipates the removal of trees in the vicinity. A Forest Conservation Plan has been developed and reforestation will be conducted as part of the project. Following the relocation of the line, work to remove Bloede Dam will commence in the summer of 2018.

The Bloede Dam was built in 1907 by the Ambursen Hydraulic Construction Company. Hydropower generation discontinued in 1932. The dam and surrounding property was sold to the state in 1938, and later incorporated into Patapsco Valley State Park, which is managed by the Maryland Park Service. The impact and significance of the dam, the first known submerged hydroelectric plant to supply electricity, will be commemorated as part of the removal project in both Baltimore and Howard counties.

I've been posting about the pending removal of Bloede Dam since 2012. Wouldn't it just be easier to send out a warning, and just blow the damn thing? After stopping the sewer line, of course.
Posted by Fritz at 4:34 PM