Fish making the spring spawning run from the Chesapeake Bay upstream into the Patapsco River swim about 11 miles of cool, shallow, flowing water before hitting a concrete wall nearly three stories high: the Bloede Dam. The wildlife obstacle and human safety hazard has stood for more than a century in Patapsco Valley State Park, but its days could be numbered.

The Maryland Department of Natural Resources is continuing a years-long effort to clear the Patapsco of dams that have outlived their original industrial uses and now turns its attention to Bloede. The dam is the largest of the Patapsco dams, and the most significant in terms of both wildlife and historical value. 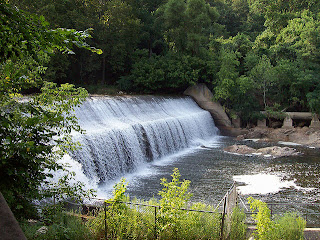 "This one is the most important," said Jim Thompson, a DNR fisheries biologist, of the dam that straddles the Baltimore and Howard County line, 230 feet across and nearly 30 feet tall along the spillway. Because the Bloede Dam is the first obstacle that herring, shad and American eels hit as they head upriver, wildlife would benefit greatly if it were removed, he said.
...
A consultant's report prepared for American Rivers and released last week said up to 90 blueback herring and hickory shad were found in 15 minutes of sampling just below the dam in the spring of 2011. Above the dam, "none of these migratory species have yet been collected," the reports said,

American Rivers is devoted to restoring waterways across the country. McClain points to success stories in Maine, where she said dam removals in the past decade have helped to restore the herring population in the Kennebec River and bring back a commercial fishery.
....
The dam was built in 1906 to generate electricity for Victor G. Bloede's Patapsco Electric and Manufacturing Co., according to a historical documentation prepared by a consultant last year for the Maryland Historical Trust. It provided electricity for a 57-lot community called Eden Terrace being developed by Bloede, a German immigrant who moved to Baltimore in 1877 to establish a textile company.

The dam has served it's purpose, and now needs to be removed.  It was a marvel of progress when it was built, the first hydroelectric dam with the generating equipment built into the dam, but it is no longer needed or working, and is just preventing the movements of migrating fish.

While googling around on this story, I found this video of teens jumping into the Patapsco River up at Ilchester.

If I'm reading the map correctly, this is just upstream from the dam.
Posted by Fritz at 7:11 PM