Jeb, the black and brown dwarfed goat at Lake Superior Zoo, sought out Brad Jago every day for a little love, attention and a gentle scratch on the forehead where his horns once stood. On Wednesday it was Jago seeking Jeb, as the groundskeeper and the rest of the zoo staff scrambled to find and recapture animals that escaped during torrential overnight flooding that forced the evacuation of some homes in a low-lying neighborhood in the port city of Duluth. 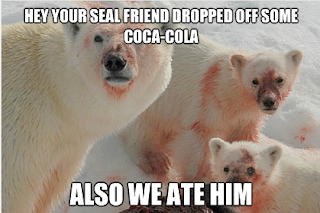 Floods fed by a steady torrential downpour have forced residents to evacuate their homes and animals to flee their pens at a zoo in a northeast Minnesota city.

Zoo workers safely recovered two seals and a polar bear that had managed to escape their enclosures but Jeb and a dozen or so other animals from the zoo’s barnyard exhibit — including other goats, sheep and a miniature donkey — drowned. “That was a tough loss,” said Jago, one of several employees who spent Wednesday afternoon grieving and regrouping after the exhausting search that began before dawn.

Hmm; I wonder if that storm is headed our way?
Posted by Fritz at 6:00 AM