The New England Journal of Medicine summarizes how people died in the United States from 1900 to the present.  The quick message: 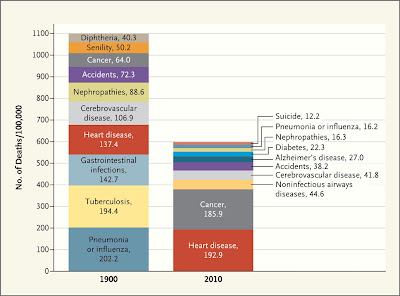 In 1900 pneumonia, tuberculosis, gastrointestinal infections composed nearly half the total deaths.  With infections largely controlled, we are left to die mostly of heart disease and cancer now at more advanced ages.  Everything else is loose change.

The article has an interesting interactive chart that shows how these trends have changed through the century+.  Go to the NEJM article, and click on the graphic at upper right.  The toll of the Spanish Flu epidemic is startling.  Just today, health researches said a new "bird flu" epidemic could start at any time.  Or never...

I found this interesting:


Accounting for the history of disease also requires us to examine why some disparities in disease are seen as proof of a natural order while others are considered evidence of injustice. The 4.3-year life-expectancy gap between blacks and whites in the United States provokes outrage, but the 4.9-year gap between men and women does not. It is tempting to assume that differences between the sexes are natural and those between races are not. But a 19th-century Journal reader might be skeptical of this explanation: men then lived at least as long as women. The survival advantage of women that appeared in the 20th century owed as much to changes in childbearing, improvements in obstetrical practice, and a new epidemic of heart disease disproportionally affecting men as to differences between the X and Y chromosomes. Disparities in health and disease are outcomes that are contingent on the ways society structures the lives and risks of individuals.