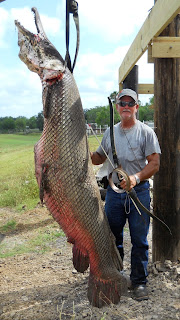 
...Crawford, with his fishing bow, stalked the great fish carefully, knowing he might only get one shot.

When he finally fired, he scored a direct hit, unleashing the fury of the 8-foot, 2-inch beast, which created an explosion of mud and water before it ran toward the lake.

Big problem, because the nylon cord had become tangled at Crawford's feet, and when he grabbed the line, as it began to tighten, it became wrapped around his hand.

The line went taut and the fish yanked the fisherman into the water headfirst. That's when Crawford's dog, Bleux, grabbed him by the cuff of the jeans, creating a bizarre riverbank tug-of-war.

Crawford ultimately was able to free his hand from the cord and stand knee-deep in the shallow canal, gripping his fishing bow, the cord still attached to the mighty fish. "There was no doubt who was in control and it wasn't me," the fisherman recalled.

The gar stole 200 feet of cord in a battle that lasted 45 minutes, before Crawford reeled it to the bank. Soaked and exhausted, the fisherman straddled the fish, reached for his cellphone -- which he had kept in a waterproof case -- and dialed a friend.

The friend arrived with a pistol, which resoundingly ended the struggle, and the two men used a rope and an ATV to drag the quarry to Crawford's house...

It exceeded his 300 lb scale and he filleted it, which leaves its weight in question, so he'll never know if he caught a record fish or not.

It would have made a great video...