Look, You Can See America From Here!

The U.S. Northern Command and joint U.S.-Canadian North American Aerospace Defense (NORAD) Command said two Russian bombers violated U.S. airspace near Alaska during recent arctic war games. Disclosure by the command in charge of U.S. homeland defense followed a report in the Free Beacon quoting U.S. officials who said the Russian aircraft had threatened U.S. air space but did not cross into it and were met over the Pacific by U.S. F-15 interceptor jets.

“There was a single out-of-area patrol by two Russian long range bombers which entered the Alaska ADIZ that were visually identified by NORAD fighters,” John Cornelio, chief spokesman for Northcom, said in an email response to questions about the recent war games. ADIZ is the Alaska Air Defense Identification Zone, a line of airspace surrounding Alaska used by the military to monitor aircraft threats.

Just a couple of long range bombers; after all, how much damage could they do?


Cornelio, the Northcom spokesman, identified the Russian aircraft were Tu-95MS bombers that “are capable of carrying a variety of payloads, including  nuclear weapons.” 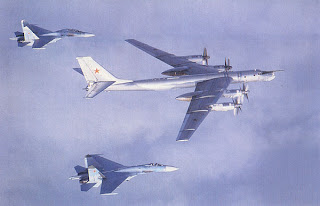 Alaska is pretty big and empty, a handful of nukes wouldn't do that much.  Maybe melt a glacier and raise sea level.


The arctic exercises by the Russians are raising concerns among European and North American governments regarding efforts by Moscow to seek control over the resource-rich arctic territory, a strategic transit point for international bombers since the Cold War.

I'm sure President Obama will be more flexible in his response to such challenges in his second term.