A Spin Around the Garden 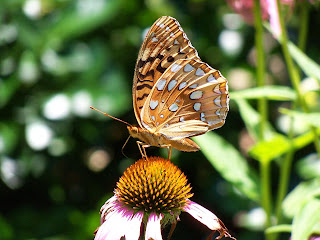 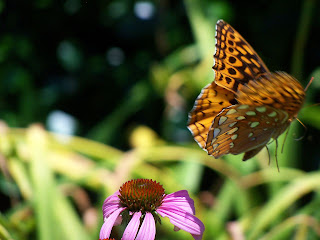 I went out a little after lunch today to pick up some of the debris the "Super Derecho" (yes, it's new word for me too; I wonder how it's pronounced?)  left on our lawn, and brought the camera.  I was pleasantly surprised to find another Great Spangled Fritillary on the Purple Cone flowers.  They seem to attract a remarkable number of pollinators and nectar sippers.

I find it hard to get a good shot of the top of the wings; they seem to spend most of their time with their wings folded up, just to frustrate me.  But I did get this shot of it leaving the flower, that's sort of in focus, and shows most of the upper pattern. 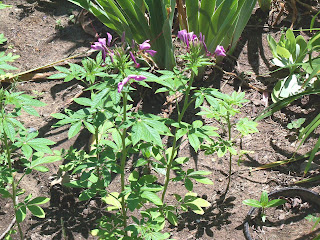 These are Cleomes from the seeds I won in Laurence Meade's contest to identify the seed capsule over at the Althouse blog.  We have Cleomes that we allow to reseed from year to year (in fact, you would have to be ruthless to root them out entirely), but we were hoping these might be a little different. 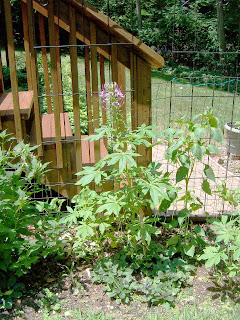 And in fact, they are.  Our original Cleomes (on the right) are much farther along at this point, and much taller.  I guess in Wisconsin you want to be sure spring has really sprung before you put much effort into growing.  Meade's Cleomes are also a darker shade of purple than ours. 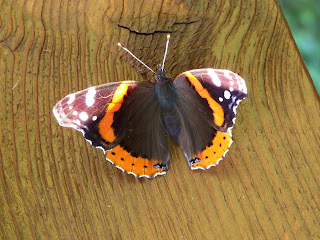 Another butterfly, the Red Admiral, on our deck.  Top view... 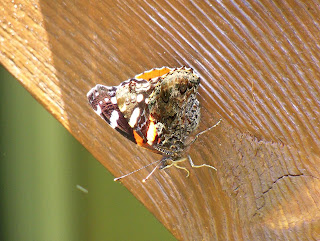 ... and the undersides of the wings.  A very cooperative butterfly.