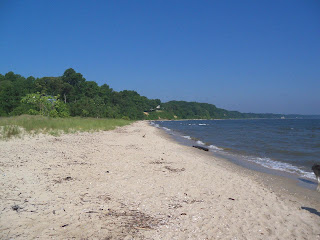 After the last two days of 95+ F weather, the brief thunderstorms we had last night came as some relief.  Overnight, the somewhat cooler and certainly much drier air moved in and made for pretty good beach walking weather, somewhere near 80 F when we arrived. 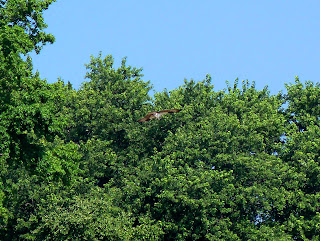 There was lots of Osprey action this morning.  At one point I had four in sight simultaneously.  Could some have been newly fledged?  The one in the picture (against the trees) was behaving somewhat strangely, trying several times (and eventually succeeding) in picking up something in the surf. 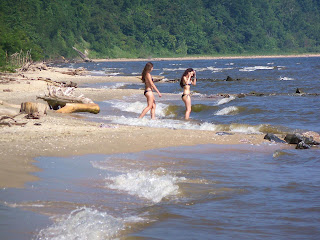 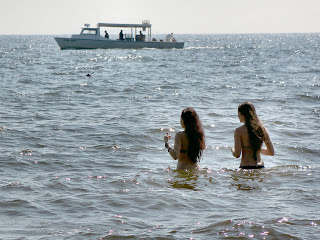 In beating the heat, we beat most of the crowd, but there were a few there ahead of us.  These girls had camped out with their boyfriends, if the tent was any indication. 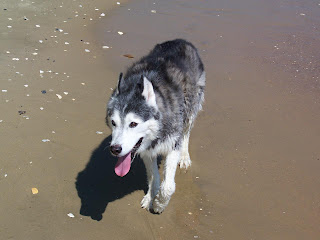 The heat was still pretty oppressive to Skye, who dogged our steps most of the way, with the occasional dip in the bay to cool her belly. She still has a good amount of her winter coat, and passionately resists any attempt to remove it with a comb. 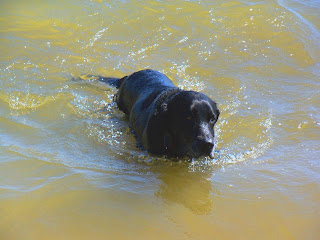 Red did a little retrieving clinic for a boy who was there with his Mom, while Joel tried to sell them a copy of "Positive Puppy Training Works" for their new dog.  Note that the water is pretty murky today, either algae, or stirred up by the storm, or both. 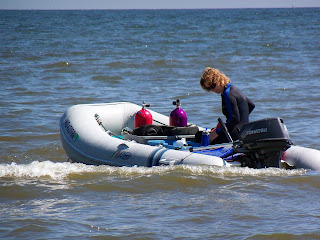 A couple of serious sharks tooth hunters. Scuba tanks, wet suits and the inflatable boat. The other diver is off camera at right, in the water.  I hope they found enough to be worth it.  We didn't (not that it's important or anything), but it is a way to keep score. We got six, all small. 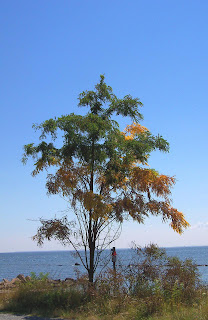 Below, a Black Locust tree near the harbor shows signs of bad salt burn.  We saw that elsewhere on the walk, and it suggests we had a very strong wind off the water since we were here last week.  I can't place it though.

Picked up in midweek by the Classical Liberal in "Rule 5 Forever".
Posted by Fritz at 3:50 PM