Did a Cosmic Triple Whammy Wipe Out Clovis?

An 18-member international team of researchers that includes James Kennett, professor of earth science at UC Santa Barbara, has discovered melt-glass material in a thin layer of sedimentary rock in Pennsylvania, South Carolina, and Syria. According to the researchers, the material –– which dates back nearly 13,000 years –– was formed at temperatures of 1,700 to 2,200 degrees Celsius (3,100 to 3,600 degrees Fahrenheit), and is the result of a cosmic body impacting Earth.


These new data are the latest to strongly support the controversial Younger Dryas Boundary (YDB) hypothesis, which proposes that a cosmic impact occurred 12,900 years ago at the onset of an unusual cold climatic period called the Younger Dryas. This episode occurred at or close to the time of major extinction of the North American megafauna, including mammoths and giant ground sloths; and the disappearance of the prehistoric and widely distributed Clovis culture. The researchers’ findings appear today in the Proceedings of the National Academy of Sciences.

“These scientists have identified three contemporaneous levels more than 12,000 years ago, on two continents yielding siliceous scoria-like objects (SLO’s),” said H. Richard Lane, program director of National Science Foundation’s Division of Earth Sciences, which funded the research. “SLO’s are indicative of high-energy cosmic airbursts/impacts, bolstering the contention that these events induced the beginning of the Younger Dryas. That time was a major departure in biotic, human and climate history.” 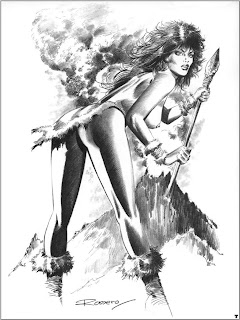 There have even been theories introduced that the Clovis culture is related to a similar stone tool set called Solutrean, found in Europe, which opens the possibility that the Clovis culture was brought by people who navigated the ice margin in the Atlantic. Recent finds  give tantalizing evidence for pre-Clovis artifacts, but sadly the hypothesis remains unconfirmed.

Several theories have been advanced to explain the Younger Dryas:

A change in Atlantic circulation due to in influx of fresh water from "Lake Agassiz" in the wake of the receding continental glaciers,

A change in rainfall due to the change in atmospheric patterns as the ice melted,

An extreme solar flare; much larger than the Carrington Event,

A Volcanic eruption touching off a "nuclear winter",

The impact of an extraterrestrial body (meteorite or comet) which caused a "nuclear" winter type event.

These findings substantially boost the last hypothesis.  Proved?  Not yet.

Could it be that a meteorite strike (or rather, multiple strikes from a large body), was the death knell of a population of early North Americans with their roots in Europe rather than Asia?  Stand by for more .