The Tribulations of Rural Living

On Thursday, June 14 at approximately 3:40 p.m., patrons at Cheeseburger in Paradise, located in the Wildewood Shopping Center in California, Md., were surprised by an unwelcome visitor when a skunk wandered into the restaurant.

It is not clear exactly what transpired, but SMNEWSNET.com has confirmed that a female was bitten by the skunk.

Animal Control was called to the scene where they proceeded to collect and kill the animal. The female who was bitten was taken to the hospital in a personal vehicle. 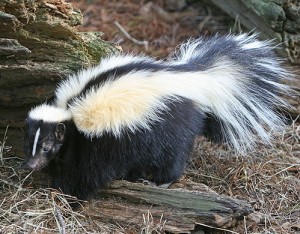 I knew Buffett fans were rabid, but I wouldn't have considered them skunks.

Rabies has been a problem in the rural counties in Maryland at least since I arrived here in 1985.  At least one rabid cat has been reported to have bitten some one in the St. Leonard/Calvert Beach vicinity.  It's important to vaccinate pets, and people who work with wildlife often get preventative rabies immunizations.
Posted by Fritz at 7:02 AM