...Along the southeast coast, other cities in Virginia, Maryland, North Carolina and Florida are monitoring Norfolk’s response to the flooding, knowing they could soon face similar challenges. Low-lying Gulf and Pacific coast cities are also watching.

Sea-level rise isn’t expected to significantly affect most American cities for at least 30 years. But Hampton Roads — including Virginia Beach and Portsmouth on Norfolk’s borders — is already knee-deep in floodwaters because, as one activist said, the area is “as flat as a pancake” and Chesapeake Bay river tributaries slice deeply inland.

Tides rise daily, but as the climate warms, seas have risen and pushed up the Chesapeake Bay around Norfolk a few inches each year, scientists said. In the spring tidal cycle, waters sometimes rise a foot or more above normal... 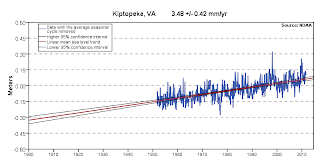 I don't know which scientists they're talking about, but sea true level rise, combined with the effects of the land sinking, is causing an apparent sea level rise of on the order of 4 millimeters a year (see graph at right).  At 25 millimeters per inch, that's a far cry from a few inches each year.  Did they intend a few millimeters per year, or a few inches per century (it's close to a foot)?

But they have the gall to mention how:


It would be a huge outlay for such a small city, particularly in a state where lawmakers recently bowed to pressure from tea party political activists and refused to allow the words “sea level” and “climate change” in a recommendation for a study of their impact on the Virginia coast, according to the Virginian-Pilot.

It's the first I've heard of "tea party political activists" taking an interest in whether something was called climate change or sea level rise; most likely it's just reporter speak for any kind of conservative political action.  The raison d'etre is taxes.  They may well oppose attempts to justify "climate change" induced "sea level rise" as an excuse for increased government spending on social concerns.

Yes, the sea will rise, as they have continued to do since the end of the last ice age.  Coast dwellers will continue to adapt or be overwhelmed.  Until the next ice age starts then we'll have the opposite problem, receding seas.

If the Washington Post wants to be taken seriously on the issue of sea level rise, they should demonstrate that they have some clue of it's actual magnitude.
Posted by Fritz at 6:54 PM