Four days ago, as fires consumed forests and house in Colorado which have force over 30,000 people from their homes, President Obama played the 101st round of golf of his presidency.  President Bush, roundly criticized for golfing during his terms as president, played only 32 rounds in two terms. If I recall correctly, he was criticized for playing while soldiers were fighting wars on his behalf; well thank goodness that's changed.

So, maybe it's not fair to criticize a president for pursuing a little leisure during his presidency.  It is, as we have been told, a hard job.

But it is fair to criticize his policies when they contribute to the tragedies. 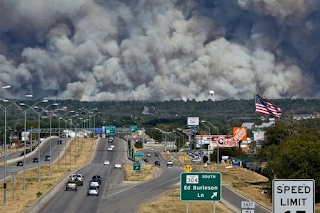 President Obama's administration has cut the funding for the flying tankers used to fight fires in the western states:


Washington-based Human Events magazine reported in September of 2011 that nearly half of the federal government’s air tankers sat idle at a California airport, as wildfires ripped through national forests throughout California, Texas, New Mexico, and other states.

It turns out the Obama administration ended a long-standing contract, leaving the Forest Service with only 11 tankers to battle 50 wildfires that were burning nationwide. A decade ago, the Forest Service had 40 firefighting tankers. 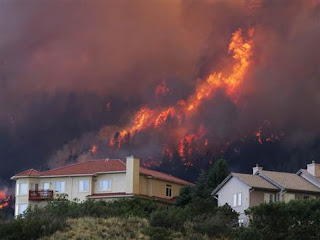 “They didn’t want to talk about it,” Gourley said of Obama administration officials.

A Forest Service official said the contract was cancelled over safety concerns, but the company had recently passed its annual inspection.

We know that Obama hasn't been exactly shy about government spending, so why would they balk at a contract for air tankers?

Environmentalists have fought the use of slurry for years, which may or may not explain why Obama seems to lack enthusiasm for a robust tanker fleet. Environmentalists sued to stop the use of fire retardant after it killed 50 steelhead trout in the Santa Ynez River near Santa Barbara, Calif., in 2009. An earlier lawsuit involved the accidental dumping of between 1,000 and 2,000 gallons of fire retardant into Oregon’s Fall River in 2002, a mistake that killed all fish in the river. That mishap involved a slurry formula that is no longer used.

As a result of the most recent lawsuit, the Forest Service adopted rules that prevent dropping slurry within 300 feet of streams and lakes except when human lives are at risk. Forest officials say the rules won’t harm firefighting efforts.

We hope that is true. Even if it is, we know that a shortage of planes to drop retardants most certainly hinders firefighting throughout the country. That’s common sense.

But good news; Obama will visit Colorado on Friday, to promise to bring federal help to the fire wracked region...

A White House statement said Obama "made clear that he has directed his team to remain focused on the fires." The president is expected to meet with firefighters and view the damage in Colorado. Federal support is also being provided to firefighters in Alaska, Arizona, California, Montana, Nevada, New Mexico, Utah and Wyoming.

Obama told the two Colorado officials to identify any other help the government can provide.

Colorado is considered one of the toss-up states that could swing the election in November to Obama or his Republican challenger, Mitt Romney.

I hope someone in the press has the cojones to ask why his administration cut the tanker program so drastically.  But I won't hold my breath.
Posted by Fritz at 5:00 AM