As you may know, if you have power, the mid-Atlantic states including Maryland and Washington DC were hit by powerful thunderstorms last night.  Winds of up to 80 mph were reported, there was widespread damage, at least four deaths, and a millions of people without electric power this morning.

My own experience was that at about 11:00 PM, I walked Skye.  The night was hot and muggy, but air was totally still, but we could hear and see lightening in the distance.

Within 5 minutes, the winds went from zero to astonishing.  You can see it in the wind data from Cove Point (just down the beach a few miles).  Sustained winds on the water jumped from about 10 to 35 knots sustained, with 55 knot gusts.

It was a very impressive thunderstorm, with lots of lightening, but I didn't see or hear any very close.  We also received about a half inch of much needed rain. 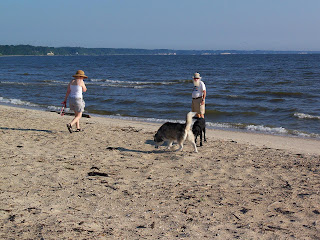 Things are much calmer this morning.  On our way to and from the beach we saw lots of downed twigs, and a few major branches, but no trees down on houses.  As of now, SMECO reports approximately 5,000 homes out of power.  We are among the fortunate to have it.  Joel isn't.  But we met him anyway at 8:00 AM, in an effort to beat the heat. 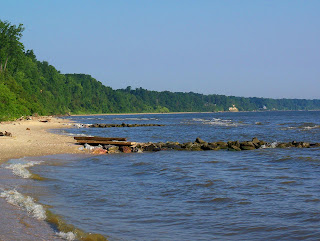 We were pretty successful; we managed the usual walk, north about 1.5 miles, and back, and only got a little sweat in the old eyeballs...

As post storm days usually are, it was gorgeously clear, and a bit breezy, enough to offset the gathering heat.  It was already 92 F at 9:30 AM this morning. 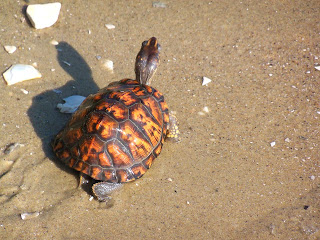 The dogs found this male Box Turtle being washed around by the surf.  Since Boxers aren't aquatic, I suspect he got washed into the Bay in a gully washer last night, and was trying to figure his way out.  After taking his picture, I put him back up by the Kudzu.  Now it's all up to him. 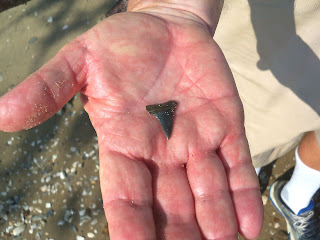 Joel found this nice Mako Shark's tooth literally in my footsteps; I must have been concentrating on something else. 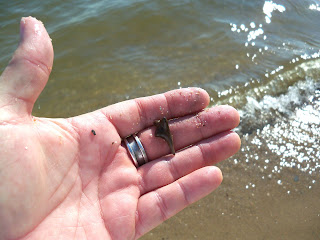 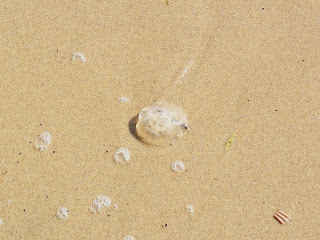 Welp, the Sea Nettle probability is 100%, and I didn't even need a million dollar oceanographic buoy to tell you that.  All I had to do was look at the beach.
Posted by Fritz at 11:08 AM