Zombie Infestation Smoulders On In Florida

Latest 'zombie' eating attack: Man under the influence gets naked, bites off chunk of man's arm 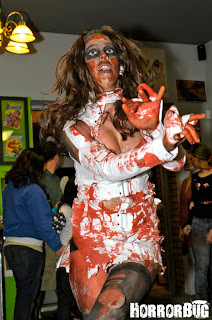 It was just last last month that Florida suffered the first outbreak of Romero style zombism. This week another similar attack occurred, but this time, the zombie survived and the victim was left with less horrifying wounds.


PALMETTO, Fla. - The latest in a string of “zombie” like attacks happened in a Manatee County home Wednesday night after a man under the influence went into a fit of rage and bit a piece of someone’s arm off during a visit with his children.

Much like the Miami face-eating attack, 26-year-old Charles Baker got naked, ate human flesh and wouldn’t go down without a fight, according to a Manatee County Sheriff’s Office report. 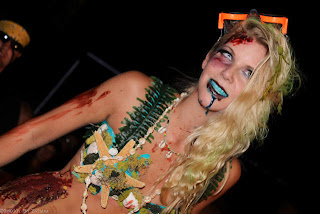 Super human strength and failure to yield to simple restraints or to respond normally to pain is part of the symptoms of the current zombie outbreak. Interesting.


Authorities say Baker went to his girlfriend’s home on 25th St in Palmetto to visit his kids at 10:15 p.m. They say he was high on an unknown substance when he knocked on the door, then barged in, began yelling and taking off his clothes. He was screaming and wouldn’t calm down, then began throwing furniture around the home.

Jeffery Blake, who lives in the home, attempted to restrain Baker, but the suspect bit him, taking a chunk of his flesh from his bicep. Blake, 48, was able to get Baker to the ground and kept him there until two deputies arrived. When law enforcement came inside, Blake released Baker. Baker got up, but would not respond to deputies orders. 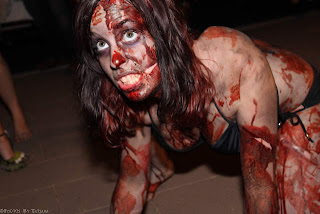 It's just surprising how many of the victims of the current wave of the "T virus" or, whatever the secret government people are calling it, are wearing bikinis at the time of their conversion.  It must be that all the exposed skin makes them more vulnerable, or something...


The suspect instead faced the deputies, tensing his body, clenching his fists and screaming. Baker, still naked, acted like he was going to rush the deputies, according to the report. Deputy Wildt deployed his an electronic control device after giving a verbal warning. 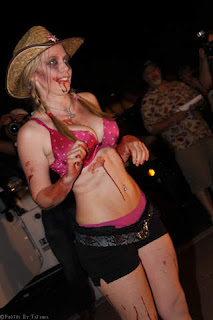 At least they appear to be minimally susceptible to tasers.  I wonder about the new sonic and thermal weapons.  Will we be able to keep the zombie hordes at bay with our heat and sound guns?  If we want to resist that is.

By this time, several other deputies had arrived on scene and were able to hold him down and handcuff him. Baker was taken to Manatee Memorial Hospital for evaluation before being transported to the jail.

Uh huh, that's what they always say: "taking him in for evaluation"...

As always, thanks to Wombat-Socho for his "Rule 5 Sunday: Away from Home" linkerage.