So, What Chord Do I Use Next?

I analyzed the chords of 1300 popular songs for patterns. This is what I found.

In this article, we’ll look at the statistics gathered from 1300 choruses, verses, etc. of popular songs to discover the answer to a few basic questions. First we’ll look at the relative popularity of different chords based on the frequency that they appear in the chord progressions of popular music.

Then we’ll begin to look at the relationship that different chords have with one another. For example, if a chord is found in a song, what can we say about the probability for what the next chord will be that comes after it?

Chord use frequency , with all songs transposed into the key of C for easy comparison.  Curiously, G and F are used slightly more than C itself.

A lot of this is just second nature to musicians.


The previous question took an overall look at the relative popularity of different chords, but we can also look at the relationship that different chords have to one another. For example, a great question to ask is, if a song happens to use a particular chord, what chord is most likely to come next. Is it random, or will certain chords sound better than others and thus be more likely to show up in the popular songs that make up our database?

There are a lot of relationships to analyze, but we’ll start it off by looking at just one for now: For songs written in C, what chords are most likely to come after an E minor chord? 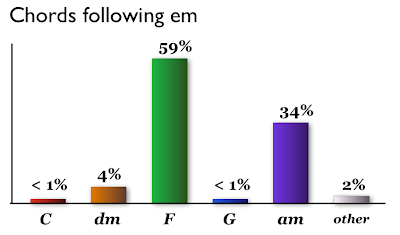 If you do Little Wing, by Jimi Hendrix, there is at least one chord with every letter in it (when transposed to E; Jimi usually performed with his guitar tuned down a half step), some minor, some 7thd or 9thd...

Email ThisBlogThis!Share to TwitterShare to FacebookShare to Pinterest
Labels: music