OK, Now This Zombie Nonsense Has Gone Too Far

It was OK, when they were just eating the faces off homeless bums, or a roommate, but now they've gone too far.  They're killing man's best friend!

What happened next is horrific. Witnesses say Daniel grabbed the family dog, beat and strangled it...then started to eat it.

The dog died at the home.

Daniel is believed to have been on a bad trip from ingesting "K-2," a synthetic drug. He was taken to the hospital and now faces a felony charge for animal cruelty. 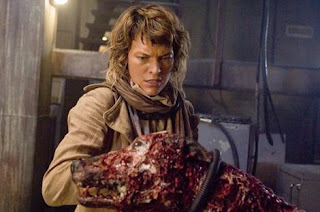 Question.  Under Romero zombie rules, do dogs become zombies when bitten by zombie humans?  Or does the disease have to arise separately from veterinary doctors messing with dog diseases?

Apparently human to dog transmission is permitted up Resident Evil zombie rules.  You show him Milla!
Posted by Fritz at 8:30 PM