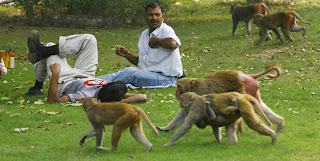 Barrel of monkeys is no fun in overrun Indian city

More than 13,000 monkeys have been trapped since 2007 in New Delhi, India, but more and more of the creatures keep appearing. The problem? People keep feeding the dang things thanks to Hindu tradition. The city's wildlife agency says the monkeys aren't their problem as they aren't wild any more. Tell that to the family of a deputy mayor who died back in 2007 after falling from his terrace during a monkey attack. Or the 14-year-old girl who was chased recently by monkeys off a five-story roof. One solution that's been floated? Get bigger monkeys to scare off the smaller ones. Don't be surprised when one of these hairy guys eventually runs for mayor.

Bigger monkeys than those to scare off the others?  I don't think there are enough Gorillas left in the world.

There might be some advantage to living in a nation with no native primates, unless you count Sasquatch.
Posted by Fritz at 6:00 AM