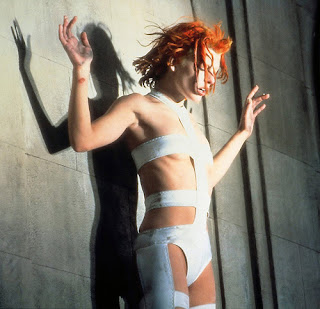 No particularly compelling news story prompted this Rule 5 post; I just happened to see one of the Resident Evil movies listed on cable somewhere and thought that Milla would make a worthy addition to the list of stars of Sci-Fi movies that I have used for some Rule 5 posts in the past.

Rule 5:  You can't talk politics or science all the time, and everybody loves a pretty girl... 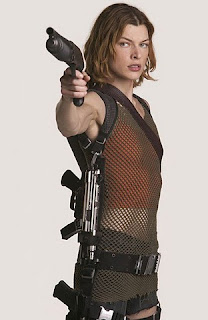 Milla was born in Kiev, Ukrainian SSR in 1975.  Her father was a Serbian pediatrician and her mother a Russian actress.  Her family appears to have been "colorful" folk:


Her paternal great-grandfather, Bogić Camić Jovović, was a flag-bearer of the Vasojevići clan and an officer in the guard of King Nicholas I of Montenegro; his wife's name was Milica, after whom Milla was named. Her paternal grandfather, Bogdan Jovović, was a commander in the Pristina military area, and later investigated finances in the military areas of Skopje and Sarajevo, where he uncovered massive gold embezzlement. He was punished for refusing to convict a friend of the crime. Later, the government briefly imprisoned him in Goli otok for refusing to testify. When he feared that he could be arrested again, he escaped to Albania and later moved to Kiev. A different version of the story claims that he was the one who took the gold. Milla's father, Bogich, later joined Bogdan in Kiev, where he and his sister graduated in medicine 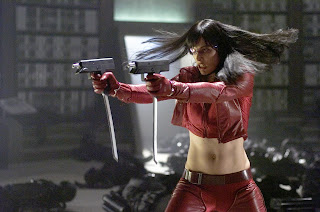 She and her family left the Soviet Union in 1980 for "political reasons".  Her father subsequently got into trouble for insurance issues in the US, and spent 5 years in prison:

"Prison was good for him. He's become a much better person. It gave him a chance to stop and think." 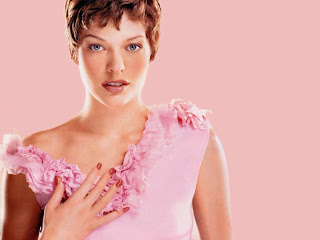 During school, many of the students had teased her because she had immigrated from the Soviet Union during the Cold War: "I was called a commie and a Russian spy. I was never, ever, ever accepted into the crowd."

School kids, they just don't have any sense... 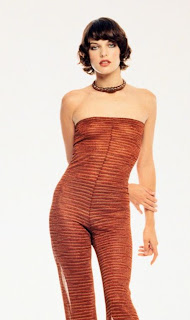 She started modeling at age 9 and had her first professional modeling contract at age 13.  She has modeled for over 100 magazine covers, including Vogue, Cosmopolitan. Seventeen, Mademoiselle, Glamour, Harper's Bazaar, and InStyle. She has also modeled for for Banana Republic, Christian Dior, Damiani, Donna Karan, Gap, Versace, Calvin Klein, DKNY, Coach, Giorgio Armani, H&M, and Revlon.

However, modeling isn't the goal, just the means: 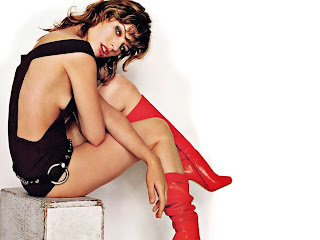 She began acting at 13 as well, and her first major role was the female lead in "Return to Blue Lagoon", where she followed Brooke Shield's lead by disrobing for the camera.

That got her nominated for both the "Best Young Actress Starring in a Motion Picture" at the 1991 Young Artist Awards, and "Worst New Star" at the 1991 Golden Raspberry Awards.

Must be a bunch of old gay guys at the Raspeberries. 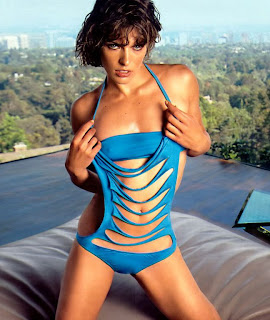 From my point of view, her film career began in 1997 with "The Fifth Element", where she starred in white duct tape  and totally fake looking orange hair along with Bruce Willis.

White duct tape is a good look for her, and being an ultra ginger means you don't have to worry about her having a soul.


"worked like hell: no band practice, no clubs, no pot, nothing"

No pot I can see, but no band practice? 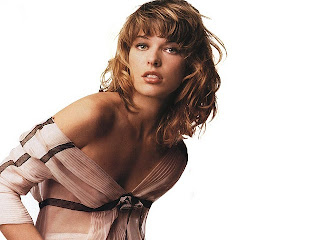 In 2002 she starred as Alice in the video game based movie "Resident Evil", where she slayed zombies and their ilk with the best of them.  She allegedly also did the majority of own stunts (don't they all say that?), and learned various martial arts (Loo King Goud?).

A box office success, the critics panned it.  Of course, critics are mostly old gay guys, and 14-17 year old boys buy all the tickets... 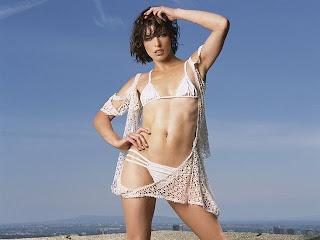 That was followed "Resident Evil: Apocalypse" in
2004 and Resident Evil: Extinction in 2007, with similar critical and commercial success; didn't some one say insanity is "doing the same thing over and expecting different results"?


I have, of course, skimmed over much of the rest of her career.  She has starred in numerous other films, none of which play nearly continuously on my basic cable channels.  A fourth "Resident Evil" is planned (Afterlife), proving that it's not about the critical acclaim, but rather the box office sales.

She has tried her hand at fashion design (hey, there's nothing wrong with white duct tape, but you might try some other colors, too".  She sings, but her singing career has not yet hit the big time, having opened for "Toad the Wet Sprocket" and "Crash Test Dummies".  You can download some of her songs for free at her website.

As always, thanks to the Rule 5 Wombat at The Other McCain for his link, Maggie at Maggie's Notebook for hers,  Jake Finnegan for his, and The Classical Liberal for his!  Be sure to go check out their post and links (that is, if you like pretty girls).
Posted by Fritz at 5:00 AM