Sometimes obvious things just need pointing out.  Byron York has analyzed recent budgets and concluded that two main factors have exploded the deficit during the Obama years.  The first is the economic downturn with caused approximately $680 billion in added "income support" (unemployment benefits etc), and the $814 Stimulus program:


There is no line in the federal budget that says "stimulus," but Obama's massive $814 billion stimulus increased spending in virtually every part of the federal government. "It's spread all through the budget," says former Congressional Budget Office chief Douglas Holtz-Eakin. "It was essentially a down payment on the Obama domestic agenda." Green jobs, infrastructure, health information technology, aid to states -- it's all in there, billions in increased spending.

As for the Troubled Assets Relief Program, or TARP -- it has no specific line in the budget, either, but that is because it was anticipated to pay nearly all of its own cost, which it has.

Spending for Social Security and Medicare did go up in this period -- $162 billion and $119 billion, respectively -- but by incremental and predictable amounts that weren't big problems in previous years. "We're getting older one year at a time, and health care costs grow at 7 or 8 percent a year," says Holtz-Eakin. If Social Security and Medicare were the sole source of the current deficit, it would be a lot smaller than it is.

The bottom line is that with baby boomers aging, entitlements will one day be a major budget problem. But today's deficit crisis is not one of entitlements. It was created by out-of-control spending on everything other than entitlements. The recent debt-ceiling agreement is supposed to put the brakes on that kind of spending, but leaders have so far been maddeningly vague on how they'll do it. 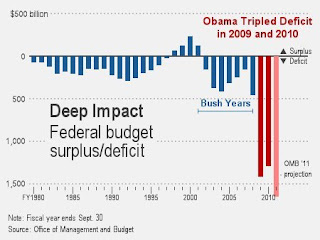 The usual suspect thrown out by the left is the spending on the wars in Iraq and Afghanistan.  However, before the election of the democratic congressional majority, great recession and Obama's election, deficits had be been trending down despite the wars.

Moreover, the original budget forecasts had been for the deficit to decline after a one year peak in 2009.  You can see from the chart on the right that prediction is DOA.

A billion here or there every year ain't gonna cut it.  Control spending first, and then go after entitlement reform.
Posted by Fritz at 8:04 PM