First the good news.  We came through Irene basically unscathed.  Our internet went out for good shortly after my last blog update, the power went out at 8:15 PM (according to the one analog clock still in the house).  We went to bed early in the dark, and slept surprisingly well, even as we heard big gusts, and breaking timber.  When we woke up it was still raining and gusty.  It was apparent that the neighborhood had been hit pretty hard: 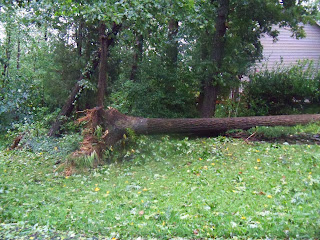 This large Poplar tree went down between our house and the next door neighbor (it was on our lot).  It survived the ice storm of 1995, even though most of it's upper limbs were broken off.  Behind it and to the left, you can see a leaning tree trunk.  That's a medium sized Hickory tree, again on our lot and leaning to the neighbors.  It's pretty well hung up in another tree, so I think we have a while to deal with it. 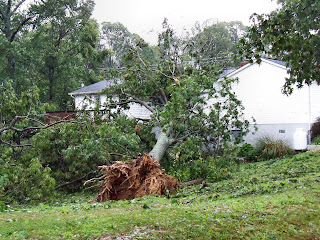 Others were not so lucky.  This house on our street was badly damage by a tree that fell into it.  Out of 20 houses on our street, at least 4 were struck by falling trees. 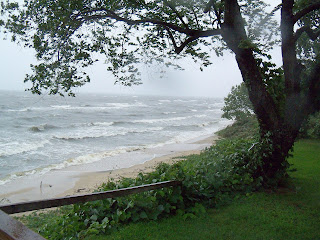 Before breakfast, I went out to check on a friends house (he's away).  The house was OK, but he lives nearer the bay, and I stopped to take this photo from near his steps.  By now the effects of Irene were clearly waning. 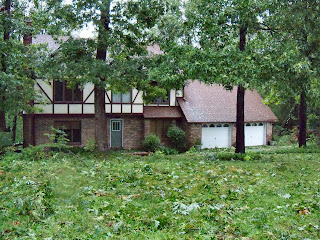 A shot of our front yard, showing the shredded twigs and leaves that covered everything.  Once the rain stopped, I got the chain saw out and began to cut up the big limbs, and the downed Poplar.  The sun came out and it was a pretty nice day after that (still a bit breezy).  After I made moveable chunks out of the limbs, we cleared the yards, and I mowed and bagged all the trash for our compost heaps.

Our power came back on about 6 PM, as we were eating shrimp boiled on the propane grill.  We did a little more cleaning after that, and went to bed tired at 9 PM.  Still no phone, cable or internet.