Irene that is. As of  9:00 AM, by radar and media reports the center of the storm has come ashore in North Carolina.  Outer bands reached us about 8 AM, and it started to rain.  Not too much yet, maybe a couple of millimeters (or in 'Merican units, just a hair) .  Breeze has picked up and the tops of the trees are swaying, but nothing extreme.

More reports later as it gets more exciting.

10 AM UPDATE.  Heavy rain, wind is rising (as you can see above).  I went and took the fishing tackle out of the boat box in case the storm surge floods it.  Georgia ran into town for a few last errands.

It looks like the storm surge has just started to affect us here: 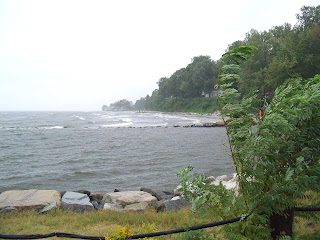 Looking south toward the old part of Long Beach.  Winds are about 20 mph at this point, and waves are picking up. 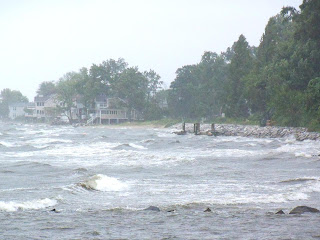 A zoom on the waves hitting the rip rap walls.  This makes it look much worse than it really is; the biggest of those wave are probably on two or so feet at this point.  It will take another few hours of a good stiff wind to build up to waves much above 5 feet here.  The short fetch and the shallowness of most of the bay make it hard to build really big waves here.  But what they lack in height they make up for with choppiness... 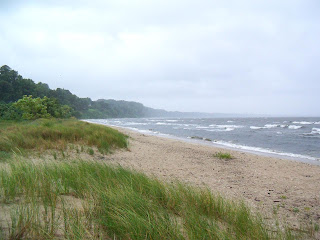 Looking north, a familiar view.  I wish I had a good water proof camera for this.

11 AM UPDATE:  It's still raining hard, we've had about a half inch since 8 AM.  Wind is still climbing; it's up to about 25 mph sustained winds at Cove Point (a few miles south). Our power is still on (and that's a good thing); this much wind is apt to knock something down into the lines somewhere in our distribution links.

11:30 AM UPDATE: Calvert County just issued evacuation orders for all dwellings within 100 ft of the cliffs.  That seems a little extreme to me...

12:00 NOON UPDATE:  We're getting serious rain here now, and the winds are up to 30+ mph sustained and still climbing.

1:00 PM UPDATE: Not much change; we have 1 inch of rain in our rain gauge, and it's falling hard. Winds are holding around 30 mph. The power has blinked a couple times...

2:00 PM UPDATE: No Significant changes, still windy and rainy; the power continues to blink, my UPS seems to be doing it's job.

3:00 PM UPDATE:  Much the same, we had one short power outage.  Wind was up a bit in the last hour, nearing 35 mph sustained.  Not enough to kick us into "Tropical Storm" category yet.

4:00 PM UPDATE.  Still about the same.  We've had 2 inches of rain by now.  One big branch came down in the driveway, and green leaves are scattered all over the ground.

5:00ish UPDATE:  Multiple power blips, but nothing long lasting.  Wind has been near 40 mph a couple times.  Total rain up near 3 inches.  I see that Walleye Pete has posted this video of people down at the beach: