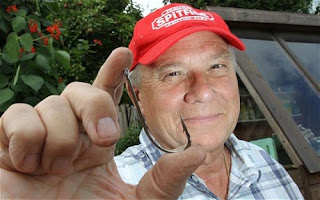 How hard a human could fight at the end of a fishing line: Angler catches scuba diver on fishing line


John Goldfinch, 61, was fishing for mackerel on the beach at Budleigh Salterton, Devon, with mates Colin and Alan Ashley when he felt a huge bite. The thrilled lifelong angler had to fight to reel in the catch as he looked forward to netting a massive fish. But his excitement turned to shock when his hook surfaced about 15 metres offshore to reveal the hapless frogman. To add insult to injury the struggling diver had been hooked between his legs... "The funniest thing was that his girlfriend then surfaced, helped him remove my tackle from his tackle and nonchalantly handed the hook back to me and apologised.

It doesn't count as a fair catch if you snag it in the genitals...
Posted by Fritz at 9:40 PM