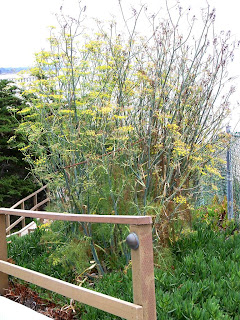 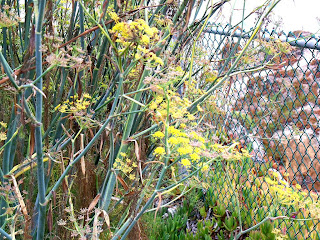 Fennel (Foeniculum vulgare) is a plant species in the genus Foeniculum (treated as the sole species in the genus by most botanists). It is a member of the family Apiaceae (formerly the Umbelliferae). It is a hardy, perennial, umbelliferous herb, with yellow flowers and feathery leaves. It is generally considered indigenous to the shores of the Mediterranean, but has become widely naturalised in many parts of the world, especially on dry soils near the sea-coast and on riverbanks.

It is a highly aromatic and flavorful herb with culinary and medicinal uses, and, along with the similar-tasting anise, is one of the primary ingredients of absinthe. Florence fennel or finocchio is a selection with a swollen, bulb-like stem base that is used as a vegetable.

I remember as kids we used to take pieces of it and chew it for the sweetish, licorice taste.