Did Humans Get Disease Immunity by Sex with Neanderthals?

Sexual encounters with archaic humans like the Neanderthals produced children who inherited key genes that have helped modern humans fight illness and disease, said a US study published Thursday. "The cross-breeding wasn't just a random event that happened, it gave something useful to the gene pool of the modern human," said Stanford University's Peter Parham, senior author of the study in the journal Science.

Random things can add something useful.  In fact, that's how evolution is supposed to work!  The universe really doesn't care whether an organism or a species survives; but random mutations can make it possible.


This study took a close look at a group called HLA class I genes which help the immune system adapt to fight off new pathogens that could cause various infections, viruses and diseases. Researchers traced the origin of one type, HLA-B*73, to the Denisovans, who likely mated with humans arriving in West Asia on their way out of Africa. The variant is rare in modern African populations but is common in people in west Asia.

"We think this had a lot to do with the pathogenic environment in different parts of the world," said Laurent Abi-Rached, a French researcher and lead author of the study. When modern humans came out of Africa, they were going into a new environment. This gave them an advantage. It was a rapid way of acquiring defense," he told AFP.

These ancient HLA genes have multiplied among modern populations and are seen in more than half of Eurasians today, said the study.

"If canoodling was the whole story, that's an awful lot of genes," said Milford Wolpoff, a paleoanthropologist at the University of Michigan who was not involved with the study but said he supported its findings. 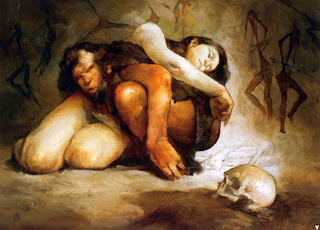 Canoodling, and a few hundred thousand years of selection, maybe.


Some mating must have occurred, given the evidence that lingers in our DNA, but even the latest findings have shed little light on the nature of those relationships -- whether violent or consensual, short or long-term.

"Even though there was probably interbreeding, that was not necessarily very frequent," said Abi-Rached.

"But it has played a major role in shaping modern human immunity."

One thing for sure we can say knowing humans today; if there was a possibility of having sex, sex was had.
Posted by Fritz at 6:00 AM