This should send the price of Les Pauls climbing.


Federal agents are in the process of raiding the offices of the Nashville-based Gibson Guitar Corporation.

U.S. Fish and Wildlife Service and the U.S. Customs and Border Protection agents began executing search warrant this morning on guitar factories and corporate headquarters in Nashville and Memphis, according to Nicholas Chavez, special agent in charge with the Fish and Wildlife. 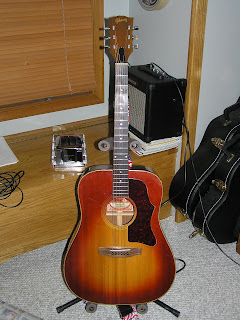 
Chavez said the raid stems from a Texas case, but declined to offer more details.

“We can’t get into specifics right now,” Chavez said. “This is an ongoing investigation.”

Gibson officials couldn’t immediately be reached for comment.Gibson was also raided in 2009 for possible violations of the Lacey Act, which bans the importation of endangered plants and wildlife. Federal officials seized ebony and other woods they said were prohibited under the act. Gibson has said in the past it was "fully cooperating" with the investigation.

Hey, maybe this will raise the value of my 1976 J-45 Gibson.  I hear the buttons on the fret board are made of unicorn ivory.
Posted by Fritz at 7:04 AM