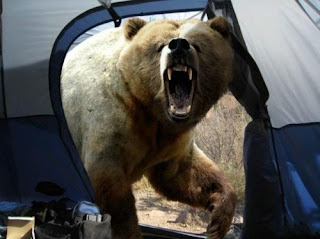 A man charged with unlawfully shooting and killing a grizzly bear had so many supporters at his arraignment Tuesday in federal court that the judge had to move the hearing to a larger courtroom.

Even there, every seat was taken as his family, friends and neighbors, young and old, squeezed in.

Jeremy M. Hill, 33, pleaded not guilty in U.S. District Court to killing the animal with a rifle on his 20-acre property near Porthill, Idaho, at the Canadian border. He lives five miles from the closest grizzly bear recovery zone.

The grizzly bear is classified as a threatened species in the lower 48 states, according to the Endangered Species Act, and protected by federal law. Hill's charge is a misdemeanor.

Hill has declined comment. His lawyer, Marc Lyons of Coeur d'Alene, said he plans to defend Hill on the basis of self-defense and protection of family.

Following the hearing, his father, Mike Hill, of Athol, said, "This whole thing is a waste of taxpayer money."

He said his son was concerned for the safety of his children playing outside when a mother grizzly and two cubs wandered onto his property on May 8.

Jeremy Hill has six kids, ranging in age from 14 years old to 10 months old. At least five were home when the grizzly was killed, Mike Hill said...

Six kids?  Surely he could spare one for an endangered species.
Posted by Fritz at 9:51 PM