The Komodo dragon, long thought to kill using "dirty teeth", turns out to have venom.


Komodo dragons kill using a one-two punch of sharp teeth and a venomous bite, scientists have confirmed for the first time. The find dispels the common belief that toxic bacteria in the Komodos' mouths are responsible for ultimately killing the dragons' prey.  An animal that escapes a Komodo's initial attack soon weakens and dies. The fierce carnivore tracks the wounded creature and dines at its leisure once the prey collapses.

Researchers have long thought that the Komodo dragon, native to Indonesia, kills via blood poisoning caused by the multiple strains of bacteria in the dragon's saliva. But "that whole bacteria stuff has been a scientific fairy tale," said Bryan Fry, a venom researcher at the University of Melbourne in Australia.

Fry and colleagues studied the biochemistry of Komodo venom after they had the rare opportunity to examine two dragons from zoos that both had to be put down due to terminal illnesses. The team found that the dragon's venom rapidly decreases blood pressure, expedites blood loss, and sends a victim into shock, rendering it too weak to fight.

In the venom, some compounds that reduce blood pressure are as potent as those found in the word's most venomous snake, western Australia's inland Taipan...

I always liked that story that Komodo Dragon bites killed because they don't brush their teeth, but in retrospect, it does seem a little simple.  No animals have good dental hygiene and not all of their bites cause systemic infections and death. And poison is a widespread feature in reptiles.

And wouldn't it be cool to have a Komodo Dragon to ride?  Especially if they're venomous? 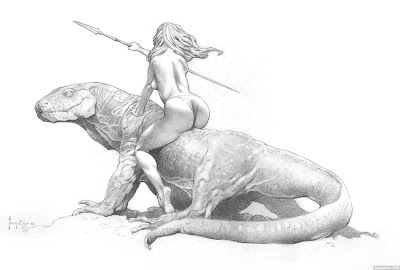