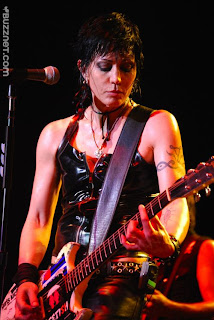 Georgia and I trundled off the Solomons Island last evening to see the ZZ-Top concert, with Joan Jett and the Blackhearts as the opening act. We had a decent dinner at one of the vendors (I had a braised beef sandwich and a beer, Georgia a chicken Parmesan), milled around for a while in the crowd, and took our seats just before the announced start time of 7:30. Surprisingly, they only missed the start time by 10 minutes; maybe with two acts the timing is more critical...

Joan Jett came on and began a set of her "best of" songs. She looks damn good for 53; dressed in tight, and low slung black leather; from row K she could have passed for mid 20's. The band looked like kids; but maybe they too drink from the cup of prolonged youth (and wore lots of make up) as Joan. Their first piece was "Reputation", followed shortly by "Do You Want To Touch Me?". The family immediately in front of us had 4 kids, ranging from a boy 6-7, to a girl 13-14. I think I might have questioned having such young kids at a Joan Jett and ZZ-Top concert, but then again, the lyrics aren't much worse than what they're exposed to on TV.

It was fun, but not deep.  Joan mostly played rhythm guitar, while the young punk played lead and sang harmony; curiously higher than Joan's faux New Yorkersey husky voice.  Given that it's a 53 year old singing about teen angst, lust and all that stuff, it was amusing, but not deep.

The sound level for Joan was good; enough to hear but not painful... 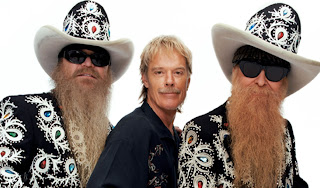 The turn around of the stage for ZZ-Top took enough time for most people to get a beer and hit the heads.   ZZ-Top did a perfectly excellent imitation of ... ZZ-Top.  They are thoroughly polished, and the boys actually seem to have a lot of fun doing the show, and the sound was like a studio album played at 12.  If they're not, they're doing a pretty good job pretending.  Billy Gibbons is simply an awesome guitarist, hitting all the notes in the solos like he's done them a millions times (and he probably has).  He's also the main "character" in the band, although there's a little play between him and Dusty Hill.  They did a good hour set of songs, most of them ZZ-Top standards, but a few  songs I hadn't heard them do before, including "Hey, Joe" in honor of Jimmy Hendrix (who did not write it)!  Frank Beard (the drummer without the beard) worked hard the whole set, and looked like he needed a hand to come out front after the encore.

Unlike the picture above, Dusty's beard was totally white, and Billy's looked like it was well on the way.  They too seem to be drinking from whatever cup seems to be keeping Keith Richards going.

Billy and Dusty were dressed in black "pseudo-mariachi" suites (similar to the one above, without the hats; Billy started with his "afro" and then added a beat up felt "blues" hat to match Dusty's mid-set).  The easy choreography between Billy and Dusty is neat; it doesn't scream of scripting, and both break out of it seemingly at will to do funny stuff.  I especially like when Billy did a descending slide by holding the guitar upright, and letting it slide down between his fingers.  Show-off!  Anyway, I really enjoyed their show.

The sound level was way up in the painful zone.  The kick drums and bass notes would rattle your chest.  They could have turned it down, just a touch.

Annoying things about the crowd.  People who stand up in front of other people who are only 5' 2" (Georgia).  Fat, drunk old ladies trying to dance (sound sexist, but I didn't see any fat drunk old men dancing).  People holding cameras and cell phone cameras over their heads for long periods).  Not too bad.  Solomon's draws a pretty geriatric crowd on the whole, and it would take a whole lot of Geritol to get the crowd rowdy.