. . . Depending on how you chose to categorize "gender disphoria" of course, but it's the way to bet: Crazy People Are Dangerous: ‘Non-Binary’ LGBT Student Activist Shot Dead


Scout Schultz, 21, was born male but “preferred ‘they’ and ‘them’ gender pronouns and identified as bisexual, non-binary and intersex,” according to his mother. Schultz was president of the Pride Alliance, a student LGBTQ organization at Georgia Tech, where police shot him dead Saturday night after Schultz refused to drop a knife:


The tense encounter was caught on camera — in which the student can be seen walking closer and closer to the police officers and shouting ‘shoot me.’
‘Nobody wants to hurt you,’ one of the officers can be heard saying.
Schultz was then shot once and immediately crumpled to the ground, screaming out in pain.
None of the police officers involved have been identified, and the Georgia Bureau of Investigation is currently looking into the shooting.
According to a press release from the bureau, the Georgia Tech campus police received a 911 call of a ‘person with a knife and a gun’ at 11.17pm Saturday night.
The release says Schultz was ‘not cooperative and would not comply with the officers commands.
‘Schultz continued to advance on the officers with a knife… Subsequently, one officer fired striking Schultz.’

“Suicide by cop,” apparently. In a statement on their Facebook page, the Pride Alliance continues the “they/their/them” pronoun charade, as if the delusions of a knife-wielding lunatic deserve respect. It never seems to occur to these activist types that acting as enablers to the mentally ill — and demanding that the rest of us play along with the “gender” game — actually makes them complicit in the deaths of such deranged people. Scout Schultz needed psychiatric treatment, not identity politics.

“When I said that the mentally ill should be in institutions, public universities weren’t the kind of institutions I had in mind.”

It's a tragedy, of course, for both the policeman, Scout and his family and friends.  I can't help but think Scout might have been better served to have his "gender disphoria" treated as a psychological condition, rather than being encouraged, celebrated and becoming a trans-activist.  Even assuming you don't categorize transgender as a form of mental illness (in what other disease would we assume the mind is right and the body is wrong?), transgenders show a striking rate of mental illness. Of course, the LTGBQRSTUVWXYZ community would prefer to shift the origin of these illness to world outside, the "lack of acceptance" by the rest of the world, but frankly, that's just too easy. Mental illnesses cluster in people, and "gender disphoria" may just be a common form of identity disorder. 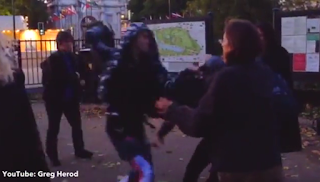 
Sixty-year-old woman is shoved to the ground as fists fly in a punch-up between transgender activists and their extreme feminist rivals in Hyde Park
— Mark Wood and Sanchez Manning, Daily Mail

While some of these headlines are misleading, wrongly depicting this incident as a “fight” between two sides, when in fact it was an attack by transgender activists on a member of the feminist group, even inaccurate coverage is better than no coverage. Sunlight is the best disinfectant, and the more attention that is focused on this issue, the more people will become aware of the hateful intolerance of transgender activists, who seek to silence their critics. Because facts and logic are against them, they resort to terroristic intimidation tactics against their opponents.

Basic freedoms and important matters of public policy are at stake in this debate, and it is obvious which side is trying to silence dissent by labeling disagreement as “hate.” People need to wake the hell up.

Nothing like a 30 year old male dressed up like a woman beating up a 60 year old real woman. As Henry Kissinger remarked regarding the Iran-Iraq war,  “It's a pity both sides can't lose”
Posted by Fritz at 2:20 PM