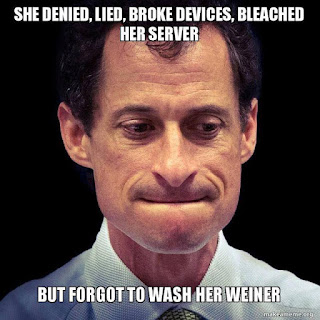 The disgraced ex-congressman broke down crying as he was sentenced to 21 months in prison Monday for convincing a high school student to undress and touch herself via Skype in 2016.

“This was a serious crime. It’s a serious crime that deserves serious punishment,” Manhattan federal Judge Denise Cote said as the convicted sext fiend dropped his head into his hand and wept.

After the courtroom cleared, Weiner sat crying in his chair with his lawyers patting him on the back. His mom also sat crying on the bench behind him, sitting next to Weiner’s brother Jason and Weiner’s dad.

The serial sexter’s soon-to-be ex-wife, Huma Abedin, was nowhere to be seen.

In addition to his prison stint, Weiner was sentenced to pay a $10,000 fine for his crime, participate in sex offender outpatient treatment and spend three years on supervised release once his sentence is up.

He will have to surrender to his designated facility by Nov. 6 — his lawyer put in a request for Schuylkill Federal Correctional Facility in Pennsylvania, or another low-security prison near New York.
. . .
The feds said the latest and most insidious chapter of Weiner’s sexting problem began on the evening of Jan. 23, 2016, when a high school student messaged him on Twitter, prompting a flurry of “provocative” responses from the former public servant, who knew the teen was in high school, court papers show.

By the end of February, Weiner — who by this time knew the girl was only 15 — was video-chatting with her via Skype and using “graphics and obscene language” to ask her to “display her naked body and touch herself,” the feds said.

It's amazing how the article manages to recite the fact that he was a former Congressman without mentioning his party affiliation until the 13th paragraph. We know that would have been prominent in the first paragraph had he been Republican. They also skirt right around how his sexting led to the FBI investigation that found a shitload of Hillary Clinton's emails, including some classified ones, on the laptop he shared with Huma (Hillary's consigliere).

The man clearly has issues.
Posted by Fritz at 4:06 PM