This Would Be Bad News 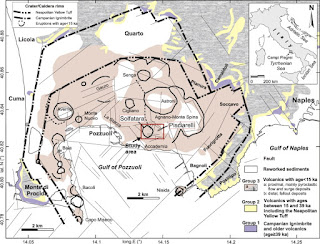 
Scientists have found the first direct evidence of a so-called 'hot zone' feeding a supervolcano in southern Italy that experts say is nearing eruption conditions.

Campi Flegrei is a volcanic caldera to the west of Naples that last erupted centuries ago.
The area has been relatively quiet since the 1980s when the injection of either magma or fluids in the shallower structure of the volcano caused a series of small earthquakes. 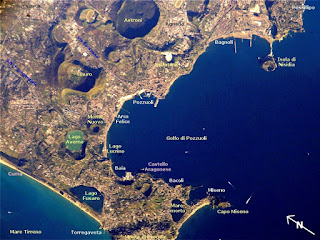 This is a truly giant volcano, much bigger than nearby Vesuvius, with a long history of very large pyroclastic ash eruptions. Satellite views of the area show a large number of what must be fairly recent craters, from the lack of erosion on them.


Using seismological techniques, scientists have now pinpointed the location of the hot zone where hot materials rose to feed the caldera during this period.

"One question that has puzzled scientists is where magma is located beneath the caldera, and our study provides the first evidence of a hot zone under the city of Pozzuoli that extends into the sea at a depth of 4 km," Dr De Siena said.

"While this is the most probable location of a small batch of magma, it could also be the heated fluid-filled top of a wider magma chamber, located even deeper."
. . .
"Whatever produced the activity under Pozzuoli in the 1980s has migrated somewhere else, so the danger doesn't just lie in the same spot, it could now be much nearer to Naples which is more densely populated.

"This means that the risk from the caldera is no longer just in the centre, but has migrated. Indeed, you can now characterise Campi Flegrei as being like a boiling pot of soup beneath the surface.

"What this means in terms of the scale of any future eruption we cannot say, but there is no doubt that the volcano is becoming more dangerous.

"The big question we have to answer now is if it is a big layer of magma that is rising to the surface, or something less worrying which could find its way to the surface out at sea."

There has been suspicion that the eruption of Campi Flegrei 40,000 years ago may have been decisive in the extinction of Neandertal man in Europe.


The First Phlegraean Period. It is thought that the eruption of the Archiflegreo volcano occurred about 39,280 ± 110 years (older estimate ~37,000 years) ago, erupting about 200 km3 (48 cu mi) of magma (500 km3 (120 cu mi) bulk volume) to produce the Campanian Ignimbrite eruption. Its Volcanic Explosivity Index (VEI) was 7. "The dating of the Campanian Ignimbrite Eruption (CI) to ~37,000 calendar years B.P. draws attention to the coincidence of this volcanic catastrophe and the suite of coeval, Late Pleistocene biocultural changes that occurred within and outside the Mediterranean region. These included the Middle to Upper Paleolithic cultural transition and the replacement of Neanderthal populations by anatomically modern Homo sapiens, a subject of sustained debate. No less than 150 km3 of magma were extruded in this eruption (the CI eruption), whose signal can be detected in Greenland ice cores. As widespread discontinuities in archaeological sequences are observed at or after this eruption, a significant interference with ongoing human processes in Mediterranean Europe is hypothesized." It is possible that these eruptions drove Neanderthals to extinction and cleared the way for modern humans to thrive in Europe and Asia.

This animation of a potential eruption in just mind blowing, when you consider the number of people in the affected area: