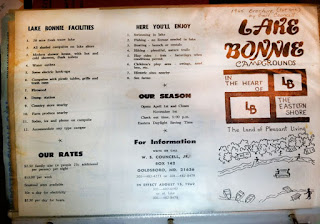 A Caroline County judge has ruled that a former Maryland woman who sued the state and the Eastern Shore town of Goldsboro, blaming them for the loss of her family campground to unchecked septic pollution, will have her day in court.

In early September, Circuit Court Judge Sidney Campen denied a motion by the town and the state to dismiss the case, saying that a jury needed to decide if either bore responsibility for the pollution to Lake Bonnie, a 28-acre impoundment on the 100-acre property that Gail Litz used to own.  The judge has yet to set a trial date.

In 1996, the Caroline County Health Department closed the campground’s lake to swimming, citing unsafe fecal coliform levels in the water, which were traced to failing septic systems in nearby Goldsboro.

That same year, the town signed a consent order with the Maryland Department of the Environment acknowledging that residents’ septic systems were failing. The order outlined a schedule for the town to install a public sewer system and said Goldsboro would be fined $100 a day if it did not comply.

The town never undertook the wholesale fix, and the state didn’t enforce the order. In 2010, Litz lost her property to foreclosure and filed a lawsuit, alleging the town and county’s negligence cost her the property.  She asked for $7 million in compensation.

Campen wrote that the “most significant and overarching disputed fact” in this case is whether, and to what extent, the pollution of Lake Bonnie continued after the 1996 consent order. “This factual dispute must first be resolved by a jury before other factual or legal issues can be addressed,” the judge wrote.

For seven years, across various courtrooms, Goldsboro’s attorneys said that the town had no money to fix the problem, and that Litz had waited too long to file suit.  The state also argued that it was not legally obligated to enforce the consent order. Lawyers for the MDE contended that they could not force Goldsboro to pay.

Like any town, they had all the money of their taxpayers at their disposal. If they refused to pay to clean up their shit, they should suffer the consequences.


Those arguments prevailed in lower court hearings, but in February 2016, Maryland’s highest court said that the state’s failure to enforce the consent order could be viewed as “inverse condemnation” if Litz could prove it was the septic pollution that caused her loss. The case was sent back to Caroline County Circuit Court for a trial.
. . .
After the bank foreclosed on Litz’s property, it sold the campground and lake for $400,000 to a family that now uses the land as a private residence. Three decades after the county health department declared that Goldsboro desperately needed a wastewater treatment system, the state and federal government funded a solution. In 2015, the county broke ground on a $19 million wastewater plant on Greensboro that will connect to the 100 or so homes in Goldsboro, about 10 miles away, next year.

Too little too late.
Posted by Fritz at 4:34 PM