You Would Need a Heart of Stone Not to Laugh

From Stacy McCain, Would You Hire @ChloeAngyal? (With Extra Special Bonus Schadenfreude). I think the opening image is enough to make you want to read it all: 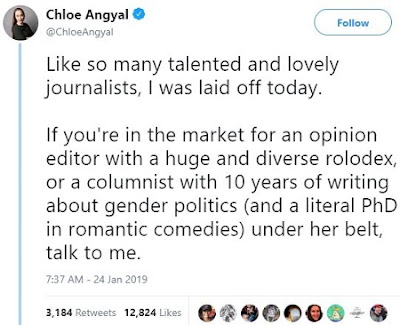 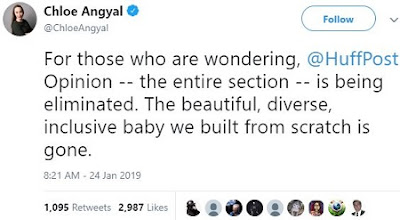 Wow, a PhD in Romantic Comedies! I'm impressed. It must be hard to stay obsessed (and PhDs require an obsession, if not much else) on something so trivial.


In March 2018, Dr. Angyal boasted of her success in reducing the number of white males writing for Huffington Post:


The Huffington Post deputy opinion editor shared her publication’s policy for promoting minority writers, yet creating a quota-like system based on race or gender could violate U.S. discrimination laws.
In a series of tweets [March 14], HuffPost editor Chloe Angyal discussed the racial makeup of the news website’s opinion columnists for the month.

One tweet seems to disclose a kind of quota system at the opinion section, with Angyal discussing her “goals” for the racial and gender composition of contributors.


“Our goals for this month were: less than 50% white authors (check!), Asian representation that matches or exceeds the US population (check!), more trans and non-binary authors (check, but I want to do better).” . . .

As Angyal admits, she tracks the race and gender identity of contributors at the beginning of each week so she “doesn’t lose track” of meeting the diversity goals.


“I check our numbers at the end of every week, because it’s easy to lose track or imagine you’re doing better than you really are, and the numbers don’t lie.” 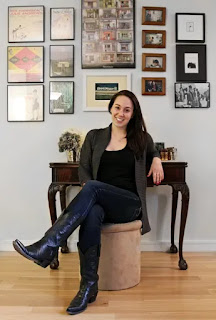 As the Daily Caller’s Joe Simonson noted at the time, this kind of “diversity” policy — a focus on “numbers” as “goals,” which could be interpreted as systematic discrimination — actually violates Title VII of the federal Civil Rights Act, as well as the state law in New York, which is where Huffington Post is officially headquartered.

Of course, Dr. Angyal’s “diversity” policy, while achieving its goal of eliminating opportunities for white male writers, did nothing to increase the diversity of ideas at HuffPo — quite the opposite. During her tenure, Huffington Post became even more of a monolith of left-wing opinion than it had previously been. Did she have “goals” for, say, pro-life Christians? Or libertarian writers? Did she check the “numbers” to ensure an adequate “representation” of pro-Trump opinions? Don’t be absurd! No libertarians or Trump supporters were ever published under Dr. Angyal’s tenure, and the opinion columns at Huffington Post remained fanatically pro-abortion, anti-Christian and, frankly, anti-American.

Oh, did I forget to mention that Chloe Angyal is a foreigner?

She’s from Sydney, Australia, and in 2014 got a Ph.D. from the University of New South Wales with a dissertation entitled “Gender, Sex, and Power in the Postfeminist Romantic Comedy.” So here we have an immigrant intellectual obsessed with “Gender, Sex, and Power” who has, by her own admission, enforced discriminatory policies that violate U.S. civil rights laws and, while I’m not saying President Trump should send ICE agents to arrest Chloe Angyal and ship her back to Australia, I’m not surprised that she’s unemployed. And I’m pretty sure foreigners don’t qualify for unemployment checks, food stamps, or other benefits. . . .

I would tell her to go home, but I like the Australians too much. Maybe she should take a few years to visit Venezuela and see how well socialism is working out. She might even be able to get a romantic comedy out of the experience.

Linked by EBL in Perdita Weeks, Jeremy & The Harlequins: Starlight and Into The Night, Soraia: Still I Rise, Punxsutawney Phil: We are sending you a message before Groundhogs Day... and Blondie: Denis.
Posted by Fritz at 11:03 AM