According to both the Peacock and WaPoo and Mueller investigation is ‘close to being completed,’ acting attorney general says


“I have been fully briefed on the investigation and I look forward to Director Mueller delivering the final report,” Whitaker said. “I am comfortable that the decisions that were made are going to be reviewed. . . . Right now, you know, the investigation is, I think, close to being completed.”

Or as Ace puts it,  Acting AG Whitaker: Mueller Has Briefed Me and He Says He Is Almost Finished With His Sham Investigation. On the other hand, I saw Judge Napolitano on Fox last night say that with Roger Stone not going quietly, he expects the Special Counsel's office to stay in business at least a year to persecute prosecute him. Maybe he'll just hand the dirty work to Andrew Weissman. FiveThirtyEight has 5 Scenarios For How Mueller’s Investigation Could End in their order of preference: Scenario 1: Trump is implicated in some form of coordination with Russia to interfere with the 2016 election, Scenario 2: Trump is implicated in obstruction of justice, Scenario 3: Trump isn’t accused of wrongdoing, but someone close to him is, Scenario 4: Mueller’s findings aren’t made public, so we don’t know whether Trump is implicated in wrongdoing and Scenario 5: The findings are made public, and neither the president nor any of his close associates are implicated in further wrongdoing.


Before taking power, House Democrats vowed to give special counsel Robert Mueller the space needed to finish his work. Just four weeks in, however, sticking to that pledge is proving difficult.

The possible clashes will be on display Tuesday morning when the new House Democratic Caucus meets for the first time to discuss Mueller’s investigation into President Donald Trump’s ties to Russia, a probe with no clear end in sight and ever-expanding subplots.

And now, rolling back to Roger Stone, Nunes: 'The Process of Discovery Is Going to Be Fascinating' in Roger Stone Case (nice Deb, PJ Media)


He noted dryly that he was pleased to see the DOJ finally taking lying to Congress seriously after watching high-ranking Obama officials get away with it for so many years. 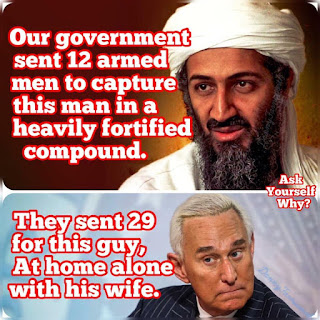 Byron York, WaEx, On closer examination, Roger Stone indictment is less than it seems. George Parry at AmSpec, How Many FBI Agents Does It Take to Terrorize an Unarmed 66-Year-Old? in Florida. 29 apparently. It only took 12 SEALs to take down Bin Laden in Pakistan.


I recall one early morning arrest of a violence-prone mobster. The assigned agents were aware that the target was at a bar with his girlfriend. Since we wanted to take him at his home so that the premises could be searched incident to arrest, the agents parked outside his residence and waited for him to show up.

Around 6:00 A.M., the target arrived and went inside with his girlfriend. Two FBI agents (the total number needed to take down this dangerous felon and conduct the search) knocked on the door. A split second later, the target stepped outside, slammed the door behind him, and announced, “Okay, let’s go.” 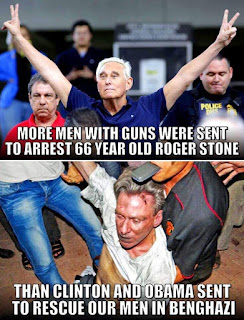 They knew Roger Stone wasn't going to resist. Hell, he'd been planning on being arrested for months now.


By this tactic, he had cleverly defeated our plan to search his residence.

Despite the target’s extensive criminal record, one of the agents said to him, “Vinnie [not his real name], if you promise to behave, I won’t put you in cuffs.” The violent felon smiled and said, “Deal.” Thus, he was transported without handcuffs or incident to the federal building where he was processed.

So maybe it the reason for all the power was to toss the joint.

Da Caller asks Did The FBI Leak Roger Stone’s Arrest To CNN?. It sure seems likely. 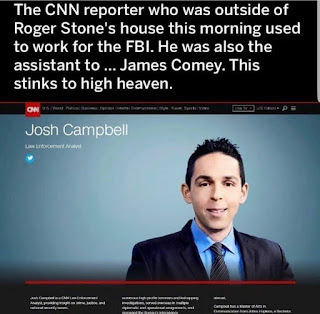 The FBI Drops In by John Dietrich at the American Thinker.


Stone should consider himself very fortunate. Many predawn raids do not end well.  Ruby Ridge resulted in the death of Vicki Weaver, who was shot in the head by sharpshooter Lon Horiuchi while she was holding her 10-month-old daughter, and the 14-year-old Sammy Weaver.  In an effort to “save the children,” the Waco standoff resulted in twenty-one children under the age of 16 being burned alive. Elian Gonzalez was not shot or burned.  He was simply deported back to Cuba.  Of course, those were the days when people were not so concerned about children.  All these incidents illustrate that the Deep State is still in charge.   It appears that our elected President is not in control. He keeps appointing Deep State apparatchiks like Wray and Barr.  The real criminals will never go to jail.

WaPoo breathlessly reports today that Roger Stone wanted WikiLeaks dump to distract from ‘Access Hollywood’ tape, Mueller witness says. And remind me again why that would be illegal? Slick Willy bombed a tent to distract from the Monica Lewinsky matter.


Whether Stone had a hand in the advantageous timing, by influencing the dissemination of the purloined emails, could help investigators answer the question of why he, and others in Trump’s orbit, allegedly lied in responding to congressional queries about possible collusion between the Republican campaign and Russian officials who interfered in the race. When asked by Melber why Stone lied, Corsi said, “I failed to take the mind-reading course at Harvard. You’ll have to ask Roger.”

Dov Fischer at AmSpec,  The endless Mueller investigation is destroying rule of law in America, with deathly long-term effects that already are being felt.


One of the tragedies of this Mueller Investigation is that it conclusively establishes something new for us: If enough well-placed wildcats within the Justice Department decide internally, outside the disinfecting light of public scrutiny, that they do not accept a President freely elected by the American People, they indeed may succeed in taking him down. Trump is unique; he is made of steel like Reagan and both Roosevelts and Lincoln. But most others can be taken down.
. . .
The latest drama that saw the Feds arrest Roger Stone with hoopla in the middle of the night — again, no collusion with Putin — underscores that our democracy and our republic is far more frail and brittle than we realize. Today they are tearing apart every person they can reach close to President Trump. But Republicans are taking notes and keeping score. . . .


Recall that the primary job of the special counsel was to uncover crimes that had already occurred relating to Russian involvement in the 2016 election. Mueller also was authorized to investigate and prosecute crimes growing out of the investigation, such as perjury and obstruction of justice, but this role was secondary to the primary one. It turns out that the secondary role has produced many more indictments of Americans than the primary one. A review of all the indictments and guilty pleas secured by Mueller shows nearly all of them fall into three categories.

First are process crimes such as perjury, obstruction, false statements, and witness tampering that have resulted from the investigation itself. That does not make them any less serious, but it is relevant to evaluating the overall success or failure of the primary mission. Second are crimes that occurred before Mueller was appointed but that cover unrelated business activities by Trump associates. The object of these indictments is to pressure the defendants to provide evidence against Trump. Third is one indictment against Russian individuals who will never be brought to justice in the United States. This indictment by was largely for show.

The strategy used the special counsel, as described by Judge T.S. Ellis III, is to find crimes committed by Trump associates and to indict them in order to pressure them to cooperate. This is what Ellis said about the indictment of Trump campaign chairman Paul Manafort: “You don’t really care about Mr. Manafort’s bank fraud. What you really care about is what information Mr. Manafort could give you that would reflect on Mr. Trump or lead to his prosecution or impeachment.”

Ellis also pointed out the dangers of this tactic: “This vernacular to sing is what prosecutors use. What you have to be careful of is that they may not only sing, they may compose.” This is indeed a tactic widely employed by prosecutors, particularly in organized crime and other hierarchical cases. However, the fact that it is common does not make this tactic right. Civil libertarians have long expressed concern about indicting someone for the purpose of getting the individual to cooperate against the real target.
. . .
If Mueller ultimately comes up empty on substantive crimes relating to Russia that were committed before he was appointed, and can point only to the three categories of alleged crimes described above, then it will be difficult to declare his investigation a success, or his appointment justified by the results. Based on what we have seen, it would have been far better if a nonpartisan commission of experts had been appointed to investigate Russian involvement in the 2016 election and to make recommendations about how to prevent foreign interference in future American elections.


Jury nullification is the refusal of a jury to convict a defendant, no matter how irrefutable the evidence against the defendant is. Law professor John Joseph Duane calls it the "Top Secret Constitutional Right." It's "top secret" because no judge or prosecutor ever likes to admit that any jury can always tell him to go take a hike. Professor Duane says the absolute right of a jury to implement jury nullification is enshrined in the Double Jeopardy Clause of the Fifth Amendment, and also in the Sixth Amendment's guarantee of a right to a jury trial whose verdicts no judge has the power to overturn.

Which is why any trial Mueller takes on will be in D.C. or NoVa, where the chances of getting a pro-Trump juror are negligible. Ed Morrissey at Hot Air recounts how Chris Christie Tried Telling Trump A War Was Coming On Russia Collusion. As a former Federal Persecutor, he knew the power that was being unleashed. Patricia McCarthy at AmTh, The Potomac two-step: Will no one stand up to the corruption in the FBI, DOJ, and CIA? Probably not, because they tend to prosecute the people who oppose them.


Manafort was scheduled to be sentenced Feb. 8 -- with several of the Virginia charges having been dropped as part of his cooperation deal with the special counsel. Monday’s decision to delay the sentencing reopens the possibility that prosecutors may wish to pile more years onto an already hefty prison term Manafort is facing.

At a hearing last week in Washington special counsel prosecutor Andrew Weissman said that while there was no current plan to bring additional charges against Manafort, he did say the special counsel wants "to reserve that ability."

Finish the phrase "Justice delayed is justice ______." ABC again, Convicted Perjurer and Spurned Presidential Lawyer Michael Cohen to testify behind closed doors to House Intelligence Committee, chairman says. Why in the world would a person already convicted of lying to Congress (the first in God only knows how long, it being less successfully enforced than the Logan Act), willingly get up before them again?
Posted by Fritz at 10:39 AM