Reign of Pain Update: The State of the Union Standoff 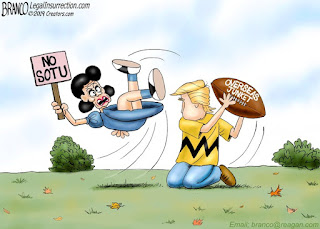 When Donald Trump said he was going to prepare for and give the State of the Union address in the House of Representatives, despite Noncy Pelosi's "suggestion" that it not be held until after the shutdown ends for "security" concerns. Noncy firmed up her position to "No." Will Trump give it to the Senate, from the Oval Office televised to the country, or written in small text on a rock or pitched through Noncy's window? We'll see.

Competing views on the costs of the government shutdown: CBS (so you know it's objective), Shutdown's damage to economy could exceed $5.7 billion cost of Trump's border wall. Steven Malanga, Shutdown Flimflam - The media portray the partial government closure as a disaster.


The stories keep multiplying, though, even as Americans note that some of their biggest concerns, such as long airport-security lines, have failed to materialize. No sooner had I finished reading the Super Bowl shutdown story than I came across this headline on Vox: “Cardi B’s viral shutdown rant made some really good points.” If that isn’t jumping the shark, then I’ve never seen an episode of Happy Days. 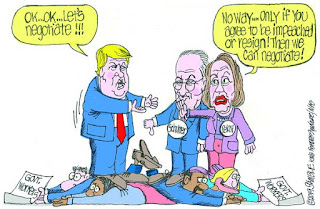 
Senate Majority Leader Mitch McConnell (R-Ky.) on Tuesday scheduled a pair of competing votes to reopen the federal government, announcing that he would bring up dueling proposals from President Trump and the Democrats that would amount to the first real action in the Senate since the shutdown began a month ago.

Neither measure looked likely to win the support from 60 senators needed to advance, and instead the votes Thursday threatened to accomplish little more than to provide each side with new ammunition to accuse the other of prolonging the nation’s longest government shutdown. The result could be only to prove that some other solution is needed to end the partial shutdown, even as 800,000 federal workers face the loss of a second straight paycheck Friday.

Trump’s proposal, which the president announced in a weekend speech from the White House, would open the government through Sept. 30 while providing $5.7 billion for a border wall and giving temporary deportation protections to about 1 million unauthorized immigrants. But it also contains stringent changes to the nation’s asylum rules, and Democrats who were already united against funding Trump’s wall described these asylum provisions Tuesday as a new poison pill.

The Democrats’ plan is a stopgap spending bill that would fund the government through Feb. 8 without providing any new money for the wall. That would let both parties negotiate on border security while the government is reopened, a respite Democrats have been demanding. 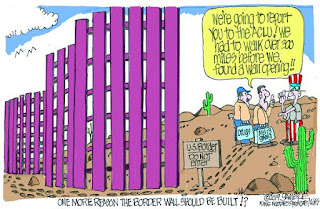 Some failure to look forward to tomorrow.  Ann subscribes to the NYT: "The Senate will vote Thursday on two separate bills that would bring an immediate end to the partial government shutdown..."


"... one backed by President Trump that includes $5.7 billion for his border wall and another that would simply extend funding for shuttered agencies through Feb. 8. The plan, a compromise between Senator Mitch McConnell, the majority leader, and Senator Chuck Schumer, the Democratic leader, offers the first hint of a path out of the partial shutdown, which is now in its fifth week and has left 800,000 federal workers without pay. The two announced it Tuesday afternoon on the Senate floor." The NYT reports.


A group of centrist House Democrats, sick of political posturing, is pressing Speaker Nancy Pelosi to counter Trump’s immigration proposal with her own potential compromise. The group, led by freshman Rep. Elaine Luria of Virginia, is asking the California Democrat to offer Trump a vote on his border wall or some sort of negotiated security package in February if he first signs a bill reopening the federal government, according to a draft of the letter obtained by POLITICO. . . . 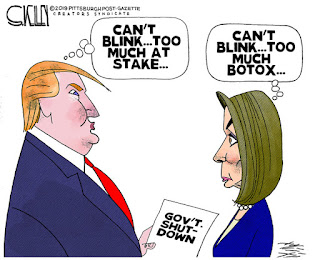 Marc Theissan at WaPoo, Trump is being the adult in the room on the shutdown


On Saturday, Trump did exactly what Warner suggested, offering Democrats a win-win compromise. In addition to his 230-mile physical barrier, Trump said he would support three years of legislative relief for 700,000 recipients of Deferred Action for Childhood Arrivals, as well as a three-year extension for 300,000 other immigrants whose temporary protected status is expiring — 1 million people in all. These extensions, Trump said, would give Congress time to “work on a larger immigration deal, which everybody wants — Republicans and Democrats.” His offer, Trump said, was “straightforward, fair, reasonable and common sense, with lots of compromise,” adding that “both sides in Washington must simply come together . . . and find solutions.”

The Democrats’ response? Pelosi called the offer “non-starter” even before Trump delivered his speech. Schumer declared it “one-sided and ineffective.” That’s ridiculous. Obviously, Trump’s proposal is only an opening bid. But instead of making a counteroffer and negotiating in good faith, Democrats are demanding unconditional surrender. That extremism is playing politics with not only the lives of the DACA and TPS recipients, who would benefit under Trump’s plan, but also the lives of the 800,000 federal government workers who are about to miss their second paycheck.

Trump is being the adult in the room. He has stopped talking about invoking a national emergency. He’s showing flexibility on the definition of a wall, the number of miles, the amount of money — and adding immigration sweeteners. To demonstrate his support for immigration, he even held a naturalization ceremony in the Oval Office to personally swear in new citizens from Iraq, Bolivia, Jamaica, the United Kingdom and South Korea, telling them “our whole nation embraces you with open arms and joyful hearts.” 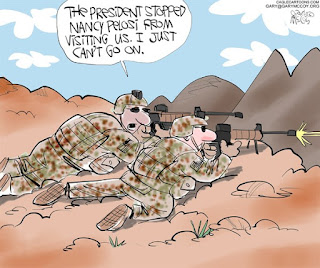 WaPoo: ‘Unacceptable’: Coast Guard’s top officer criticizes lack of payment in government shutdown. I agree. First of all, the Coast Guard should be moved out of DHS and into DOD, which is funded. But that takes time because it has to go through Congress, and I'm sure the Democrats would block it. Second, agencies need to make provisions for long-term funding of "essential" personnel in the event of shutdowns. Again, it would need to go through Congress, and again, I suspect Democrats would block it. They need the hostages.