Some Russiagate to Get Rolling

Starting with the Wombat's In The Mailbox: 01.08.19 who brings us Don Surber's response to the newest Manafort "revelations" Mueller grasps at another straw

The Guardian: "Manafort accused by Mueller of sharing 2016 polling data with Russian linked to Moscow intelligence" !!!

So? Is this illegal? No.

Hillary hired a firm that worked with Kremlin officials and Russian spies to get dirt on The Donald. That Russian Dossier is the basis of Bungling Bob Mueller's witch hunt.

Guess what? The Washington Post shared polling data with Russian spies and anyone else with access to its web site. Ditto the Times and the Guardian.


New York Times has made a significant edit to their report on Paul Manafort‘s sharing of Trump campaign polling data with an associate believed to be connected to Russian intelligence.

There’s been a great deal of commotion lately after Manafort’s legal team botched a series of court redactions and inadvertently revealed that he gave campaign data to his former business partner, Konstantin Kilimnik. When the Times initially reported on the news, they said Manafort had his former campaign deputy Rick Gates pass the data to Kilimnik so it could be relayed to Oleg Deripaska, a Russian oligarch closely tied to the Kremlin.

On Wednesday, the Times made a correction to their piece, saying Manafort actually wanted Kilimnik to direct the data to Ukrainian oligarchs Serhiy Lyovochkin and Rinat Akhmetov, not Deripaska.

Ukrainians, Russians, The NYT doesn't know the difference, they all talk funny. Instapundit: But you can be sure that these “inexplicable” errors will all point in one direction.

Three journalists with a byline on this story somehow got it inexplicably wrong. Three. https://t.co/X89RcD8q8Z
— Stephen Miller (@redsteeze) January 9, 2019

I still predict Barr gets zero Democratic votes for confirmation.

More from the Daily Mail: Trump's pick for new attorney general is 'BEST FRIENDS' with Robert Mueller who was a guest at his daughters' weddings - and their wives share a Bible study (so did anyone warn the president?).

Rosenstein to leave DOJ in coming weeks. (Fox) When/if Barr is confirmed. If I were Rosenstein, I'd want out of that mess and into the more lucrative world of high level lawyering too. Plus, he's hopelessly conflicted with the Mueller probe, and he should leave before he gets tainted too badly. I'm still not sure if he's a white hat or a black hat. Gray is good too.

Speaking of which, Jim Jordan, Doug Collins and Mark Meadows Take Action to Expose Ongoing DOJ Institutional Fraud… (Sundance at CTH) Where in the world is John Huber who is supposed to be investigating it?


According to our own independent sourcing, as a direct consequence of the Sessions recusal issues, DAG Rosenstein was in charge of approving all OIG investigative document production and DOJ/FBI scheduling for testimony. Mueller’s team gave Rosenstein a list of restrictive lines of inquiry that would be considered obstructing their own investigation and should thereby be considered ‘out-of-bounds‘ for OIG review; those instructions broadly created limits on what Horowitz could see, and who Horowitz could interview.

General Counsel Boente, hired by Christopher Wray, ultimately concurred with Mueller and Rosenstein’s decision thereby blocking any internal investigative efforts under the auspices of protecting the integrity of the ongoing Mueller probe. A bureaucratic catch-22.

As a result of team Mueller’s moves, multiple people including John Carlin, Mary McCord, Bruce Ohr, Nellie Ohr, Carter Page and any other inside official with knowledge of the FISA application and downstream issue, is off-limits for DOJ-OIG questioning.
. . .
You see, here’s where Mueller and Rosenstein are Machievellian. IG Horowitz will be allowed to see the material, but only *after* the Mueller team is finished with their probe. So technically Rosenstein wasn’t lying to the President – he just wasn’t being entirely forthcoming with the timing. So long as the Mueller probe exists, the IG is blocked from review.

Which could change with the departure of Rosenstein. 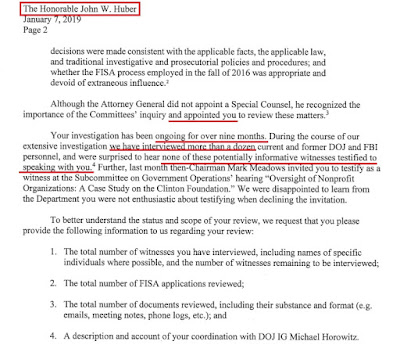 Ace: The Democrats Efforts to Attack Our Democracy Didn't Stop With the Jones-Moore Race in Alabama -- The False Flag Campaign of Deceit Continued Into the 2018 Midterms


Adam Schiff will hop right on this. (Thanks, NeverTrump!)

Which was plausible, because the Pierre Omidyar-funded Bill Kristol and his other leftist-funded friends were doing the same thing.