Yesterday, we summarized the fallout from Robert Mueller's team debunking of the infamous Buzzfeed story alleging that the Mueller team had documentary evidence that the President had asked personal attorney at the time Michael Cohen, to lie to Congress about when they stopped considering building a Trump Tower in Moscow, a project that never went forward.

Tom Maguire at Just One Minute: You Can't Make This Stuff Up. Unless You Do.


I actually have a laughably simple explanation for how we arrived at this train wreck that does not involve wilful lying by anyone. Suppose Cohen imagined the ongoing Moscow project as a big payday for himself and was Keeping Hope Alive while Trump, who had been chasing this for decades, had mentally written it off.

Then, somewhere in the course of a two hour meeting on other things, or during an elevator ride, Cohen gets two minutes on Moscow, which Trump tunes out.

Now, months later, Cohen has to testify to Congress. He has a clear memory of discussing Moscow with Trump, so he asks Trump what he should say. Trump has a clear non-memory (if that is even possible) of the topic being raised, so he instructs Cohen to say it was never discussed after January.

Trump is sincere but wrong-ish. Is it a "discussion" if he is not listening and gives utterly distracted answers such as "Yeah, yeah, sounds great"? Is there other evidence of his engagement, such as emails he clearly wrote or approved?. However, Cohen sincerely believes Trump was engaged in these discussions, so he interprets Trump's directive as an order to lie and testifies to that effect to Mueller.

As I have written before (but where?), it's pretty easy to imagine scenarios where Cohen and Trump have different opinions on when they stopped considering the Moscow project. It's not like there's necessarily a bright line.

Citing a leak in the Mueller operation, the WaPoo attempts to autopsy the death of the story: Inside the Mueller team’s decision to dispute BuzzFeed’s explosive story on Trump and Cohen. Basically, BuzzFeed was gently warned they had it wrong, and published anyway.


The reporter informed Mueller’s spokesman, Peter Carr, that he and a colleague had “a story coming stating that Michael Cohen was directed by President Trump himself to lie to Congress about his negotiations related to the Trump Moscow project,” according to copies of their emails provided by a BuzzFeed spokesman. Importantly, the reporter made no reference to the special counsel’s office specifically or evidence that Mueller’s investigators had uncovered.

“We’ll decline to comment,” Carr responded, a familiar refrain for those in the media who cover Mueller’s work.

The innocuous exchange belied the chaos it would produce. When BuzzFeed published the story hours later, it far exceeded Carr’s initial impression, people familiar with the matter said, in that the reporting alleged that Cohen, Trump’s former lawyer and self-described fixer, “told the special counsel that after the election, the president personally instructed him to lie,” and that Mueller’s office learned of the directive “through interviews with multiple witnesses from the Trump Organization and internal company emails, text messages, and a cache of other documents.”

In the view of the special counsel’s office, that was wrong, two people familiar with the matter said, speaking on the condition of anonymity to discuss internal deliberations. And with Democrats raising the specter of investigation and impeachment, Mueller’s team started discussing a step they had never before taken: publicly disputing reporting on evidence in their ongoing investigation.

Continuing on, Trump Thanks Mueller For Slapping Back At Buzzfeed Story (Hot Air)


‘It hurts me to say it but mainstream media has really hurt its credibility”, Trump said. He called the story – one that claimed President Trump instructed his former lawyer Michael Cohen to lie to Congress about a prospective business deal in Moscow a “total phony story” and a “disgrace to the country, to journalism. Media coverage was disgraceful.” Apparently, disgraceful is the word of the day. He’s not wrong.

Althouse:"BuzzFeed's report... as written, was as clean as it gets: Trump directed Cohen to lie about the Trump Tower in Moscow project, and there’s tons of evidence to support that."


"Very rarely has a story been so unequivocal — usually there are more hedges and acknowledgments of what isn't known. And unlike most other reportage in this saga, this accused the president of a felony — a very different bar. Democrats read the story and began immediately dreaming up articles of impeachment. Even some conservatives joined the 'If true' chorus...."
Writes Axios in "A reckoning for political journalism" (also reporting that BuzzFeed Editor-in-Chief Ben Smith is standing by his story, saying "We literally don't know what the special counsel is referring to" and "This is a line of reporting that has been repeatedly vindicated").

WaPoo, Mueller publicly disputed the BuzzFeed report. Here’s why it’s a such rare move for a prosecutor. Again, boiling down the verbiage, it seems like the Mueller team doesn't mind innuendo, but they don't want their investigation blamed.  BuzzFeed Won’t Say Which Documents Its Reporter Saw For Story That’s Been Disputed By Mueller


“In the interest of protecting … sources, we aren’t going to speak further on the details of who saw what and when, beyond what’s in the reporting,” BuzzFeed spokesman Matt Mittenthal told The Daily Caller News Foundation on Saturday.

Why are they protecting sources who clearly lied to them? So they can publish more lies later. Eric Wemble at WaPoo: BuzzFeed and 'if true’: The day when no one knew anything, but they sure speculated a lot.

The media reacted the way you might expect. Crying that someone would dare credit their honesty and objectivity. WaPoo: BuzzFeed’s stumble is highest-profile misstep at a time when press is under greatest scrutiny

Your network just played 24 hours of what we now know was a lie. You should slow your roll for a while. https://t.co/eYRG1qKngb
— Kurt Schlichter (@KurtSchlichter) January 19, 2019


Wa Freebe: CNN Analyst: Many Americans Will Dismiss Media as ‘Leftist Liars’ Over Disputed BuzzFeed Story. Well, they were revealed to be such. Twitchy: ‘You fail your profession’: Chris Cuomo says ‘Mueller didn’t do the media any favors tonight’. Does he owe them any favors (though, to be fair, they've been pretty nice to him all the way along)?

"Mueller didn't do the media any favors tonight, and he did do the president one ... This allows them to say, 'You can't believe it. You can't believe what you read." --@ChrisCuomo.
— David Rutz (@DavidRutz) January 19, 2019

Levin Blasts Buzzfeed Report, Past Questionable Reporting: 'Yellow Journalism as Low as I've Seen'. A high bar but it just might meet it. Roger L. Simon, BuzzFeed, Acosta, and the Non-Existence of Journalism.Twitchy,  Chris Hayes steps on a rake with a ‘Nixon was literally impeached for this’ hot take


To be fair, the word literally has literally switched meaning. . .

Sundance at CTH: Buzzfeed, Like Lawfare, Has a Role to Play in Resistance Operation….


All of it is a nothing-burger, but that doesn’t technically matter for the needs of the ‘resistance’; what they need is a tenuously valid innuendo trail they can exploit with Michael Cohen on February 7th, that will allow Elijah Cummings to pass that specific aspect to Adam Schiff and Jerry Nadler.

See how that works?

Sara Carter: Ohr’s Testimony: Is It Enough To Launch DOJ Investigation Into FISA Abuse? It should be. But they need to get rid of the Democrat partisans at the heads of DOJ and FBI. Curt at Flopping Aces: Judge Rules State Dept. Officials and Clinton Aides Must Be Deposed About Clinton Email Scandal and Benghazi. That's a start 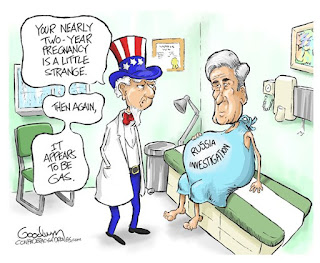 The Bulwark, What Do You Mean ‘No Mueller Report’?


The bad news is that, while months of discourse has focused on whether the “Mueller report” will be made public, Barr signaled that there probably won’t be any “tell-all” tome for potential public consumption in the first place. As he properly noted, there are two reports referenced in the language of the special counsel regulations—one by the special counsel and the other by the attorney general.

The first one is “confidential” and goes to the attorney general exclusively. The point of that report is to “explain[] the prosecution or declination decisions reached by the Special Counsel.” Disclosure of that kind of information in the special counsel’s files is governed by routine DoJ regulations. Those don’t authorize public release of documents relating to “subjective observations” and even limit release of factual matters. In short, how prosecutors make decisions in individual cases is not the kind of information that the public has a legal right to know.

The second report is the one that people have been calling the “Mueller report.” But that report involves “Notification and reports by the Attorney General”—not the special counsel.


The Wombat was a little late with Rule 5 Monday: Elizabeth Pipko and FMJRA 2.0: Abrasive Flow Machining this week.
Posted by Fritz at 10:43 AM