Something a Little Different from the Beach 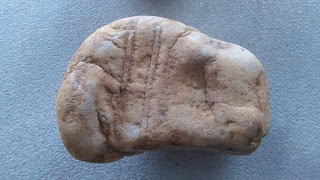 I picked this up yesterday. A cobble with ancient fossil worm tubes in it. They're called skolithos.

In this article, they are called the "oldest fossil in Virginia."


The oldest common fossils in Virginia, these are traces of the tubes inhabited by primitive worms living along a Paleozoic shoreline. Found along the western flank of the Blue Ridge Mountains.

On the Calvert Fossils and Trip Reports page, I wondered about how they got this far down Bay, and I got this response:


I was informed that these find their way down onto the bay and other rivers over the years trapped in the roots of trees. These trees collect them from up north in their root system. When the tree is uprooted in a flooding or other event it carries them down the rivers and into the bay until the roots rot off dropping all the rocks trapped in them

Fossils being carried down the rivers by tree roots. Cool!
Posted by Fritz at 4:07 PM