On Friday, January 18, 2019, Mayor Bowser will sign the Clean Energy DC Omnibus Act of 2018, codifying the District as the nation’s preeminent leader in clean energy and climate action by setting a mandate of 100% renewable energy by the year 2032.

The historic piece of legislation will bolster Mayor Bowser’s Clean Energy DC plan, which includes 57 action items for how the District will reach this ambitious target, including raising the solar carve-out to 10% by 2041, establishing a task force charged with forming building energy performance standards (BEPS), and mandating the transformation to clean energy in the for-hire vehicles sector.

2032 is far enough out, though, that Meriel will reap the benefits of making the mandates now, but not the failure when it doesn't come to pass. Largely virtue signalling.

Good luck with that. I expect to see Washington DC bristling with wind generators and solar power fields. At present, Washington D.C. is an enormous net importer of energy: 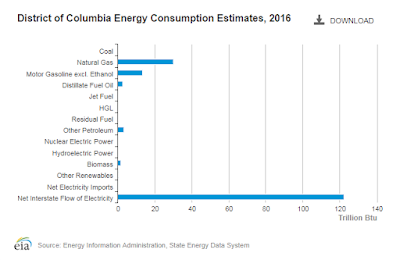 I don't expect to see that change in the next 14 years. They will be at the mercy of nearby states, largely Maryland and Virginia.
Posted by Fritz at 7:25 PM