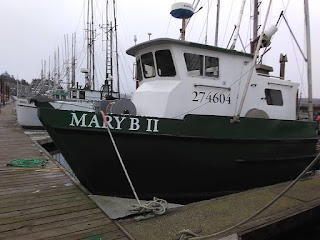 Three fishermen have died after their crab boat capsized in the the treacherous Oregon waters featured on the TV show Deadliest Catch: Dungeon Cove.

The US Coast Guard say the vessel was crossing the dangerous Yaquina Bay bar in 14 foot waves on Tuesday night when the tragedy unfolded. 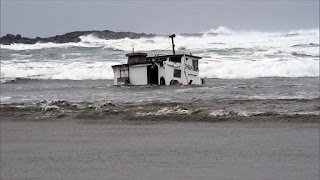 Two of the three crew members were recovered from the Mary B II unresponsive and died at hospital, according to reports. A third died trapped in the boat.

The 42-foot boat vessel - thought to have been featured on the Discovery show - was spotted capsized at the entrance point of the two jetties.

I went through the Yaquina Bay channel many times as a grad student at OSU. I don't remember it being as scary as the Humboldt or Astoria bars. But it all depends on the wind and waves on a given day.


James Lacey, 48, of South Toms River, New Jersey was found in the water and Joshua Porter, 50, of Toledo, Oregon was found on a beach north of the north jetty.


Petty Officer Levi Reed told Komo news: 'The Coast Guard was on scene quickly, even as it happened as vessel's crew had asked for escort across the bar, so we were there very quickly.

'Unfortunately, we were not able to recover them. The Yaquina Bay bar is a dangerous bar, as are all of the river bars in the Pacific Northwest.

The North Pacific has no mercy.


'We did everything we could. Unfortunately, it was just a tragedy outcome and our hearts and thoughts are with the family and friends of the crew.'

It's pretty bad when the Coast Guard is on scene and can't rescue them.

I would also like to point out that the Coast Guard is the only branch of the armed forces being affected by the current government shutdown. Because the Coast Guard is under Dept. of Homeland Security, they will start missing pay tomorrow.


Employees of the U.S. Coast Guard who are facing a long U.S. government shutdown just received a suggestion: To get by without pay, consider holding a garage sale, babysitting, dog-walking or serving as a “mystery shopper.”

The suggestions were part of a five-page tip sheet published by the Coast Guard Support Program, an employee-assistance arm of the service often known as CG SUPRT. It is designated to offer Coast Guard members help with mental-health issues or other concerns about their lives, including financial wellness.

“Bankruptcy is a last option,” the document said.

The Coast Guard receives funding from the Department of Homeland Security and is subjected to the shuttering of parts of the government along with DHS’s other agencies. That stands in contrast to other military services, which are part of the Defense Department and have funding.

The Coasties are the good guys. They don't deserve it.