The "big news" of the day, is of course, that the Russian lawyer at Trump Tower meeting charged in separate case (CNN)

The Russian lawyer who attended a 2016 meeting at Trump Tower with members of the Trump campaign was charged by federal prosecutors in New York with obstruction of justice in connection with a money-laundering case, according to an indictment unsealed Tuesday that highlighted her ties to the Russian government.

Natalya Veselnitskaya, who gained prominence as a result of a meeting with Donald Trump Jr. and other members of the Trump campaign after he had been promised damaging intelligence on Democratic presidential candidate Hillary Clinton, was charged by the Manhattan US Attorney's Office, which had handled the money-laundering case involving a Cyprus-based investment firm and its Russian owner.

As that case proceeded, Veselnitskaya, a member of the defense team in that matter, gave a false declaration to the federal court in New York about a response by the Russian government in that case, concealing from the court that she "had participated in drafting those supposed independent investigative findings in secret cooperation with a senior Russian prosecutor," according to the indictment.

Her false assertion caused the court to make a ruling she sought, denying the US government's motion for partial summary judgment in the money-laundering case, and was used by the investment firm as the basis for multiple court filings during the litigation, prosecutors said Tuesday.

There is little expectation, however, that Veselnitskaya will face the obstruction charge in a US courtroom. A 43-year-old Russian citizen and resident, she is not in the US, and it's unlikely that she'll ever be taken into custody unless she leaves Russia. 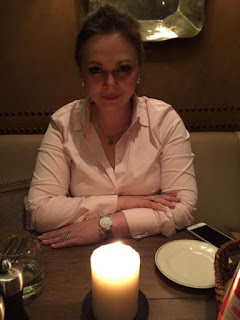 
There’s nothing explicitly in this indictment about Trump or the Mueller probe. Veselnitskaya is instead being charged for conduct that took place months before she sat down with Donald Trump Jr., Paul Manafort, and Jared Kushner in June 2016.

Yet much of what she is said to have brought up in the infamous meeting is connected to all this. Per testimony and Manafort’s notes from the meeting, Veselnitskaya mentioned Browder, Russian adoptions by American families, and the Magnitsky Act.
. . .
All parties involved in this meeting have claimed it was essentially a bust — that Veselnitskaya provided no useful dirt, and that there was no follow-up during the campaign. Special counsel Robert Mueller’s office has investigated the meeting, but in the year and a half after news of it became public, no charges about it have yet been filed.

In Russian Lawyer Who Worked With Fusion GPS and Met With Trump Jr. Charged With Obstruction of Justice Ace notes :


Nowhere in this Washington Post article does it mention that Veselnitskya worked with Fusion GPS to both roll back the Magnitsky Act and entrap Trump Jr.

Because of course it doesn't. They're all part of the same lie. 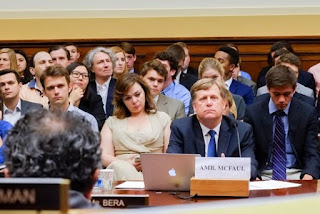 
Veselnitskaya worked closely with Fusion GPS to investigate Browder. Fusion compiled reports questioning Browder’s claims about Magnitsky and the Prevezon case. At the same time Fusion was working on that project, the Washington, D.C.-based firm was also working with former British spy Christopher Steele on an investigation of President Donald Trump’s possible ties to Russia.

Veselnitskaya was with Fusion GPS founder Glenn Simpson on the morning before the Trump Tower meeting. Fusion GPS also provided information that Veselnitskaya provided to Russia’s prosecutor general, Yuri Chaika. That same information was included in a memo Veselnitskaya took into her meeting with Trump Jr. The memo sought to link Browder to illegal campaign donations to Democrats.

And even they didn't manage to work in the fact that Veselnitskaya was in the US on a special visa provided by Obama Attorney General Loretta Lynch. Veselnitskskaya is an interesting figure in all of this. Clearly a Russian government (I hesitate to say pawn, because she's more like a knight or bishop) she was probably playing both the Obama and Trump camps. It's too bad we'll never get to hear from her.

From the UK's Daily Mail, Paul Manafort shared campaign polling data with a 'Russian spy' when he ran Trump's White House bid and lied about it to Mueller's investigators, court documents reveal after redactions are botched


Former Donald Trump campaign chair Paul Manafort sent campaign polling data to an alleged Russian spy in the midst of the 2016 campaign, according to a filing by his lawyers that was not properly redacted.

Manafort's lawyers strenuously pushed back against prosecutors in a memo filed under seal before a Monday night deadline – disputing the claim that he intentionally lied despite a deal to cooperate with authorities.

But due to an error, it was possible to read the memo in its entirety – including redacted material – when it was posted on a court web site.

The former Trump campaign chair also 'conceded' that he had discussed a Ukraine peace plan with a former employee who Special Counsel Robert Mueller's office has said has ties to Russian intelligence.

Notice the scare quotes around Russian Spy? The man in question, Konstantin Killimik  was an partner and employee of Manafort's, a translator with a military background. Could he have been a spy? Probably; I assume anyone Putin let's off the leash is at least cleared and covered by a handler. It's what the Russians do; it's who they are. It doesn't mean Manafort was conspiring or colluding with Putin. Kilimnik has also been indicted in absentia, making it unlikely he'll ever face trial or provide any information.


A federal judge has ruled that the $350 million misconduct lawsuit, filed by Trump ally Jerome Corsi against Robert Mueller, will move forward.

On Thursday, Judge Richard Leon ordered Corsi's case against Mueller to be randomly assigned to another judge.Corsi, a longtime associate of former Trump campaign advisor Roger Stone, is suing Mueller, the Justice Department, and others, for $350m over prosecutorial misconduct, leaking confidential information to press, and unconstitutional surveillance.

Mr. Corsi accuses the special counsel of waging a "politically-motivated" criminal investigation against him.


The Supreme Court has declined to intervene in a mysterious subpoena fight that apparently involved an unidentified foreign-government-owned company and special counsel Robert Mueller.

Last month, the unknown firm asked the high court to block a federal judge’s contempt order and $50,000-a-day penalty for refusing to comply with the subpoena, arguing that the company is immune from U.S. grand jury subpoenas. The company also insisted that complying with the subpoena would violate the law in the firm’s home country.

But on Tuesday, the Supreme Court turned down the company’s request to step into the dispute, at least for now. The order in the case came a little more than two weeks after Chief Justice John Roberts put a temporary freeze on the contempt order and the sanctions.

The court’s order Tuesday offered no explanation for its decision and no justice publicly signaled any dissent. The high court did indicate that Roberts referred the issue to the full court and that the short-term stay he ordered last month was now dissolved.

So the presumably Russian company can now be charged $5000 a day for fighting Mueller, which they will no doubt decline to pay in the end. WaT:  Graham, Senate Judiciary Committee move to protect Mueller: 'This will serve the country well'


Graham is a friend and ally of the president’s but has frequently warned him not to mess with Mueller’s job.

“I think this will serve the country well,” Graham said in a joint statement ahead of the bill’s introduction.

Also at WaT:  House Republicans demand update on Huber probe into bias at FBI, DOJ. They should have done this while they still had some power.


Mr. Huber had been assigned by former Attorney General Jeff Sessions to investigate the Justice Department’s handling of its probe into the Clinton Foundation and how it secured a Foreign Intelligence Surveillance Act warrant on Trump campaign adviser Carter Page.

But Mr. Huber’s investigation has been dogged by allegations that he has not interviewed witnesses who could shed light on those topics.

In a letter to Mr. Huber, Mr. Jordan and Mr. Collins said they interviewed dozens of witnesses while his probe was simultaneously running.

“During the course of our extensive investigation we have interviewed more than a dozen current and former DOJ and FBI personnel, and were surprised to hear none of these potentially informative witnesses testified to speaking with you,” wrote Mr. Jordan, the ranking member of the House Judiciary Committee, and Mr. Collins, the ranking member of the House Oversight and Government Reform Committee.

I hope the Huber investigation is not just another DOJ/FBI coverup.

At the Atlantic, Trump is  Worse Than Watergate. And from WaEx: A warning for Trump in George Washington death plot


According to a new historical book from thriller author Brad Meltzer, Washington was targeted for assassination by his own bodyguards. But the nation’s first president found out first and strung up one of the plotters in a hanging before 20,000.

In the First Conspiracy: The Secret Plot to Kill George Washington, Meltzer and co-writer and documentary producer Josh Mensch unveil their research on the scheme that occurred just days before the 1776 signing of the Declaration of Independence.

Set for a Jan. 8 release, the book also reveals the first efforts by the federal government to set up intelligence operations that the FBI and CIA are now known for.

Meltzer said his book may have a lesson for today’s politics and even President Trump.

“George Washington was loved, and they were plotting against him. So if you think there couldn’t be a plot today, you’re not paying attention,” said the New York Times bestseller.

They played for keeps back then.
Posted by Fritz at 9:34 AM