After another late start:

Oh looky, Collusion! Molly Hemingway at the Da Federalist: Top Mueller Officials Coordinated With Fusion GPS Spouse In 2016. Andrew Weissman was in it from well before the appointment of Mueller. Mueller was merely appointed to be the figurehead of the Special Counsel operation. Weissman is the in the driver's seat. "Tyler Durnden" at Zero Hedge: Dossier Shocker: Top DOJ Official Sounded Alarm, Warned Of Clinton Connection And Possible Bias. But somehow the warning didn't get passed onto the FISA court. I wonder why not? I mean, opposing counsel could do that right? What, you mean there is no opposing counsel? IBD: Criminality Of Deep State Investigation Of Trump Confirmed — Has U.S. Become A Banana Republic?. When you're charged with enforcing the law, it's easier to get away with breaking it. Sebastian Gorka suggests we Crush the Coup: Break up the FBI. There comes a time in each organization where it needs to be seriously reformed or destroyed. We're there: 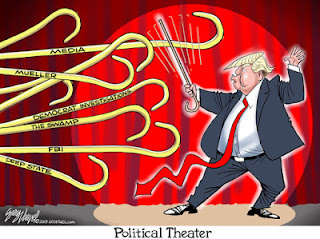 Given the last two years of continued assaults against President Trump by Mueller and Obama-holdovers such as Deputy Attorney General Rod Rosenstein, the confirmation of a new attorney general might not be enough.

There may be one solution that preserves the patriotic agents who are protecting the nation while helping drain the Beltway swamp: dissolve the FBI, fire all the senior political operators still in the Hoover Building, and make the 56 FBI field offices across the nation—where the real agents work—the counterterrorism, counterintelligence, and criminal investigations division of the Department of Homeland Security.

This way we may prevent the next palace coup.

On the matter of the translator, Front Page mag: Old “Russian Collusion” Stories Recycled to Unfairly Attack Trump. Would you expect any less of WaPoo? NR: The ‘Trump Hid His Meetings with Putin’ Stories Begin to Unravel. Like most of them do. After liberals absorb them as gospel.


Concerning Trump’s first meeting with Putin in 2017, although a notetaker reportedly was not present and Mr. Trump allegedly took possession of his interpreter’s notes, Secretary of State Rex Tillerson attended this meeting and provided a detailed read-out to senior U.S. officials. It is clear that the unnamed officials cited in the Washington Post piece on the 2017 Trump-Putin meeting were irritated that they were not provided with copies of Tillerson’s read-out of the meeting, not that there wasn’t a read-out. It also is ridiculous for the press to assert that President Trump said something nefarious to Putin with Tillerson present.

NYT (cited by Hot Air) Will We Ever See Mueller’s Report On Trump? Maybe. A lot of news value there.


Mr. Barr also noted that the Justice Department typically keeps confidential so-called declination memos where prosecutors explain what they uncovered about anyone they decide not to prosecute.

On Wednesday, Mr. Kinkopf noted that the Justice Department had taken the position that sitting presidents could not be indicted while in office. If Mr. Barr strictly enforces the view that department policy forbids putting out negative information about people whom prosecutors declined to charge, he said, that would prevent Justice Department officials from releasing information about Mr. Trump’s actions.


The former general counsel for President Obama made “false and misleading statements” to the Justice Department regarding work he did for the Ukrainian government that has come under scrutiny in the special counsel’s probe.

Greg Craig’s allegedly false statements were revealed in a settlement announced Thursday by the Justice Department. The agency announced it was settling with Craig’s former firm, Skadden, Arps, Slate, Meagher & Flom, which worked with former Trump campaign chairman Paul Manafort on behalf of Ukraine beginning in 2012.

Skadden Arps agreed to register retroactively with the Justice Department as a foreign agent of Ukraine and to pay a $4.6 million fine, the same amount that the firm was paid for its consulting work.

As part of the settlement, Skadden Arps acknowledged that it acted on behalf of the Ukrainian government “by contributing to a public relations campaign directed at select members of the U.S. news media in 2012.”

Until recently the charge of acting as an agent for a foreign power often violated and rarely enforced, but if they're going to enforce on Manafort, they need to enforce it on all the Democrats too. 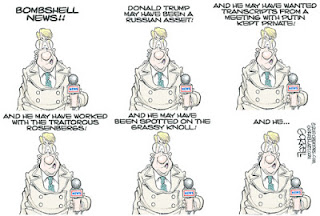 The liberals and Democrats are still hoping to eek something out. Politico,  The circular firing squad: Mueller targets turn on each other. Bububuzzzfeed: President Trump Directed His Attorney Michael Cohen To Lie To Congress About The Moscow Tower Project Ed Morrissey at Hot Air: Does Mueller Have Evidence Trump Ordered Cohen To Lie To Congress?. The word of a self-admitted perjurer with an axe to grind? Best witness ever! A little later, Buzzfeed Reporter: No, We Haven’t Actually *Seen* Evidence Trump Suborned Perjury, But … we really really want it to be true! The quintessential Trump campaign story: A bag of cash, Michael Cohen and a rigged online poll. I forget, a confessed fraud as well.

Speaking of rigged online, Research Psychologist Epstein: Google Manipulation shifted 800,000 to 4.6 million votes in 2018 Election. And you know which direction they went.
Posted by Fritz at 12:54 PM