Yeah, it happened yesterday, but the best posts came in after I posted.I think the title says it all on this one from Watts Up With That: Grounded: President Trump Helps Nancy Pelosi and her Fellow Democrats Reduce their Carbon Footprints.  Via the Wombat's In The Mailbox: 01.17.19 Don Suber:


When Nancy tried to cancel President Donald John Trump's State of the Union speech, I thought it's petty.

Today, while she and her cronies were aboard an Air Force bus headed for a military flight to Europe, the Commander-in-Chief cancelled the flight. 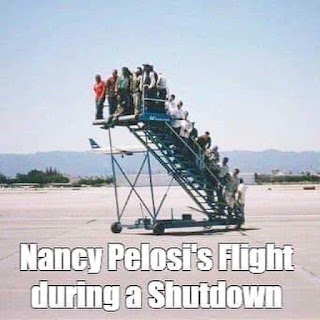 A woman elected from some gerrymandered district in San Francisco challenged the Leader of the Free World.

He left her on the bus.

He physically grounded her. 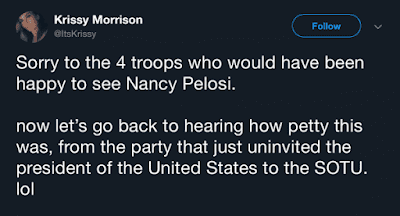 Also from  the Wombat's In The Mailbox: 01.17.19 Twitchy: ‘Priceless’! Video of Rep. Adam Schiff getting off bus after Trump canceled Dems’ trip wins reactions it so richly deserves


and EBL: Nancy Pelosi – Leaving On A Jet Plane?  Ace: Stop, Stop, It's Not Funny Anymore 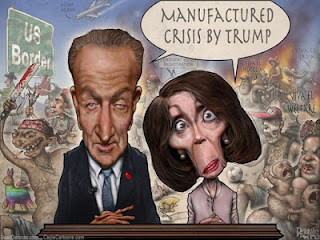 "Oh wait, I was wrong, it just got funny again. . . ." Also from Ace: CNN: Nancy Pelosi Isn't Lying When She Dishonestly Claims She's Only Postponing the SOTU Over "Security Concerns." No, She's Merely Executing a "Crafty" "Political Play" (Which Involves as a Central Element a Huge Lie)


Jazz Shaw notes that CNN is eager to call Trump a "LIAR" about everything, and so wonders why, even though CNN admits with a big wink-and-grin that they know she's lying about the reasons for the SOTU gamesmanship, why they're not calling this a "lie" but merely a "cunning" stratagem and crafty "political play"?

It couldn't possibly be that, as with Barack Obama's "If you like your doctor you can keep your doctor" lie, uttered hundreds of times, CNN approves of all the lies that advance the Democrat political agenda? 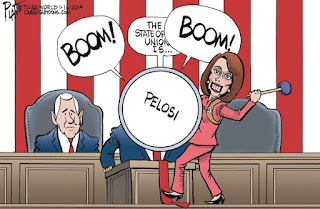 But seriously folks Take This SOTU and Shove It (Michael Walsh at American Greatness). Nancy Pelosi Might Have Just Blown Up the State of the Union, And That’s OK. (Jeff Greenfield at Politico). In Praise of Trump! No, Really. "Killing the State of the Union speech is exactly the kind of norm-busting that we could use more of." (Jonathon Last at the Bulwark).


No one likes the State of the Union. The media hates covering it. The speechwriters hate writing it: They have to wrangle dozens of different departmental stakeholders all vying for attention while also managing a principal who never hears the word “no.” The sacrificial lamb tapped to deliver the opposition response hates it, because no one ever comes out of the rebuttal looking good. And voters don’t care about the speech, either. It’s an incoherent laundry list of pablum and no matter what is happening—fear, famine, war, recession—somehow the state of our union is always “strong.”

I have no great fondness for televised SOTUs. 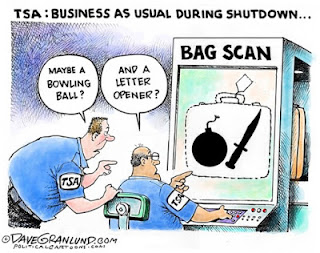 Politico: How the shutdown will inflict lasting damage. It won't. Usually, having EPA or HUD show any interest in your day is a sure sign it's going badly. But whadabout TSA?

Bloomberg: More Unpaid TSA Screeners Are Citing Financial Hardship for Missing Work. It's been less than a week since they missed a paycheck. Oakland Airport TSA Agent: ‘Things Not Being Checked Like They Should Be’. On the other hand, previous random checks of TSA's ability to spot guns and bombs suggest that's business as usual. But, boy do they have a comprehensive knife collection.

Almost 1,200 Immigration Cases In Illinois Canceled Due To Government Shutdown, Buying Immigrants More Time. This unfortunate, but not a fatal flaw considering there are estimates of up to 22 million illegal aliens. It would be better to solve the problem at the source. 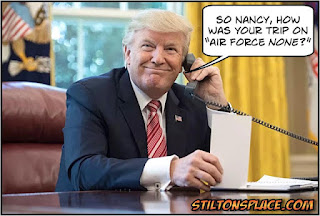 
The State Department on Thursday instructed all U.S. diplomats in Washington and elsewhere to return to work next week with pay, saying it had found money for their salaries at least temporarily despite the ongoing government shutdown.

In a notice to staff posted online and sent to employees, the department said it had found money to pay most of its employees beginning Sunday or Monday for their next pay period. They will not be paid for time worked since the shutdown began in December until the situation is resolved, said the notice, which was signed by William Todd, the deputy undersecretary of state for management.

I guess they checked between the seat cushions of their fainting couches.

At 538 Nate Silver analyzes whether The Shutdown Will Hurt Trump’s Re-election Chances?


. . .  So all of that sounds pretty bad for Trump. But will any of it really matter to Trump’s political standing, in the long run?

The glib answer is “probably not.” We’re a loooong way from the presidential election. And presidential approval ratings, as well as those for congressional leaders, typically rebound within a couple of months of a shutdown ending. A shutdown in October 2013 that caused a steep decline in ratings for congressional Republicans didn’t prevent them from having a terrific midterm in 2014, for instance.

Also consider the insane velocity of the news cycle under President Trump. If the shutdown were to end on Feb. 15, and special counsel Robert Mueller’s report on the Russia investigation were to drop the next day, would anyone still be talking about the shutdown?

Moreover, there hasn’t been that much of a shift, so far. In the context of the narrow historic range of President Trump’s approval ratings, which have rarely been higher than 43 percent or lower than 37 percent, a 2-point shift might seem relatively large. But it’s still just 2 points, when many past presidents saw there numbers gyrate up and down by 5 or 10 points at a time.

But Shock Poll: Trump Gains 19 Points with Latino Voters During Border Wall Shutdown. Funny thing is that Hispanics are not monolithic on the subject of illegal aliens. Many of them realize large numbers of very poor illegals will push down wages, likely theirs.

And a twofer from Ann Althouse: Some weary sighers and defeated shruggers are telling The Atlantic that only a shocking disaster can end the shutdown.


I'm reading "Waiting for a Shutdown to End in Disaster/Aides on Capitol Hill fear that a dramatic government failure may be the only thing to force President Trump and the Democrats back to the table", from McKay Coppins:


The basic theory—explained to me between weary sighs and defeated shrugs—goes like this: Washington is at an impasse that looks increasingly unbreakable.... For a deal to shake loose in this environment, it may require a failure of government so dramatic, so shocking, as to galvanize public outrage and force the two parties back to the negotiating table.
[T]he one theme that ran through every conversation was a sense that the current political dynamics won’t change until voters get a lot angrier.... [O]ne congressional staffer who wondered aloud whether it might take a stressed-out air-traffic controller causing a plane crash to bring an end to the shutdown. And several aides worried that some kind of terrorist incident would end up serving as the catalyst to get the government up and running again....
If one thing unites most Republicans and Democrats on the Hill these days, it’s that there is little use in trying to negotiate in good faith with the Trump White House. The president is simply too volatile, too prone to change his mind in a fit of pique, too apt to reverse course after watching Fox News....

ADDED: I'm trying to understand "little use in trying to negotiate in good faith." I realize the author must want to say that Trump is in bad faith. But being "volatile" — or, redundantly, "prone to change" and "apt to reverse course" — is not in itself in bad faith. It's a style of negotiating, and I suppose it's annoying and hard to match and beat, but "bad faith" entails deception and fraud. Perhaps the author means that Trump's negotiating style is so effective that those on the other side of the deal feel that if they "negotiate in good faith," they'll lose, and that's why there's "little use in trying" their usual techniques.